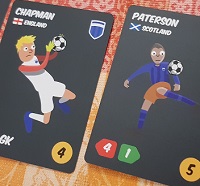 Football (soccer, for all you American friends), like many other sports, is a very dynamic engagement that is hard to implement on a tabletop. Yes, there have been attempts made, i.e. the legendary Subbuteo, newer Time of Soccer, or more recently, Counter Attack.

No, Race for the Title is a significantly simpler game, designed to introduce board gaming to a broad audience. I’ve been given a chance to review a prototype version of the game that is going to hit Kickstarter these days.

Race for the Title Facts

How to Play Race for the Title

Race for the Title uses deck-building as the game’s main mechanism. This is made as simple as possible and anyone who has ever played Dominion or Clank! will be instantly at home.

The rules are short and simple. Each turn you draw five cards and those dictate what you can do. There are three types of cards:

The main choice on your turn is whether to play a match. You can choose an opponent freely (ideally, you choose the one with the weakest current cards on display) to increase your chances of winning. The winner is decided by the rating comparison, while the uncertainty of the match is simulated by a dice roll.

While luck does play a role, it feels like it’s just the right amount of it. Long-term, the ratings and raw strength of your players will prevail. Just like stadiums for income, you can buy formation cards that offer permanent attack and defense bonuses.

The deck-building part is pretty standard. After the match, you sum up your income (adding your stadium bonus if you played a match) and then you go shopping, which is always one of my favorite parts of deck-building.

Beter stadiums, players, formations, income cards, and better action cards. The progress is present, and you can feel your team improving as you can afford more expensive cards and ditch the lousy starting cards.

A nice touch is that the players you can buy are alleged to one of four clubs the players choose at the setup. If you buy a player with your club’s symbol, that player gets a permanent +1 on both attack and defense ratings.

The deck-building part is well done and a lot of fun. Available cards offer many ways to build your deck. You can go attack or defense heavy, focus on disrupting your opponents, make your deck as thin as effective, or do a little bit of everything. 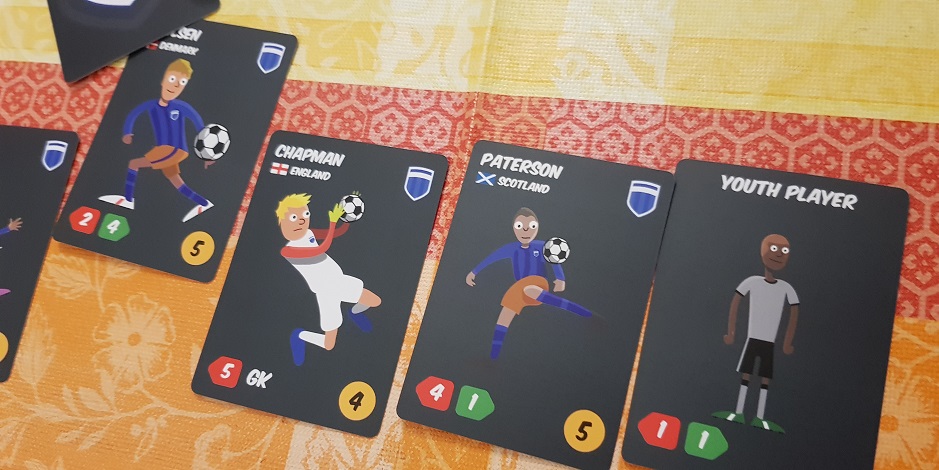 The “match” part is an innovative and thematic way to score your deck. The designer used a quick and effective method of resolving them, which guarantees fast and flowing gameplay.

You have some influence over it (i.e. playing a yellow card or an injury card to remove an opponent’s most dangerous player), but if you want something more advanced, like actual formations, goal scorers, or substitutions, you’ll be disappointed. But for the scope of the game (family-friendly board game), I think the mechanism is sufficient.

If one of the players runs too far ahead in points, there are also two catch-up mechanics implemented. Any time you play a match against a leading team, your income is increased by 1.

There are also a couple of positive incident cards included, which I find a bit weird since they are quite strong (such as getting a permanent income bonus) and make the already winning team win even easier.

Race for the Title scales plays well with all player counts from 2-4. While a two-player game offers tight tug-of-war dynamics, a 4-player game is more open and moving (cards on display change faster and you have more choice when selecting an opponent for a match), but the core gameplay doesn’t alter much.

A solo mode is also included, and it’s highly customizable and easy to manage. You can play against any of the four clubs, you can include special abilities of those clubs, and you can build your opponent’s deck to scale difficulty. There’s not much maintenance of your opponent. His deck is static throughout the entire game and he plays a match every turn. This way you know exactly what to expect and can focus solely on your play.

Overall, a very good and fun solo mode. The only small grudge I have is that you’ll be doing a lot of deck shuffling and card drawing/discarding. 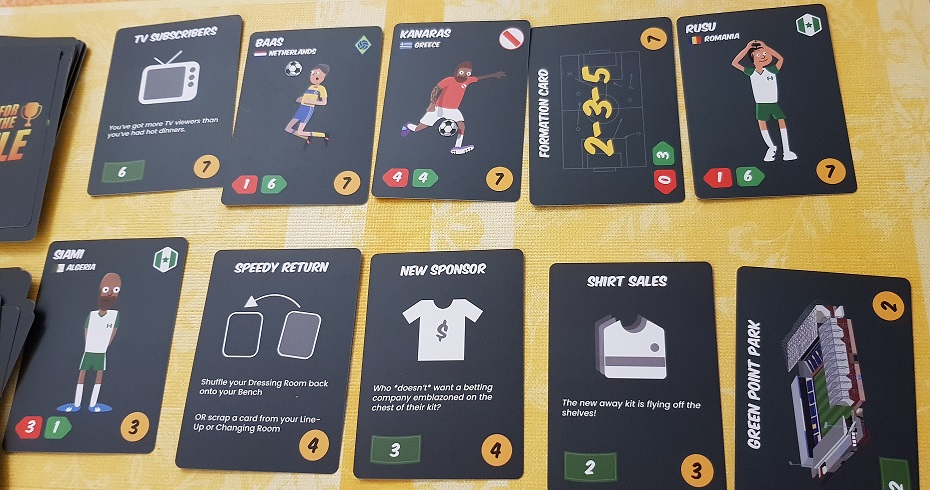 I left this paragraph for last intentionally, since what I had in my hands was a prototype. The cards in particular are of decent quality and the art on them (all the players, stadiums, and clubs are fictional) is nice and has a goofy style, as does the flavor text on other cards.

I believe this part is going to be further improved for the final version (in particular, the player cards will receive a two-tone green background), so I’m confident the end product will be on a high level.

Who should back this on Kickstarter?

The big question, of course, is whether you should back Race for the Title on Kickstarter. This depends mostly on what your relationship with deck-builders is. Everything in this aspect has been seen in other games before.

But if you don’t mind another deck-builder, this time with a goofy football theme, I see no reason why you shouldn’t back it, particularly as it’s not that expensive. It might be a great tool to convert your football friends into board gamers. More deck-builders: