When the game features over 500 components it may rightfully seem intimidating to potential buyers or new players. But is A Feast of Odin really a difficult game to learn and play?

Is A Feast for Odin difficult?

Despite its complexity, A Feast of Odin is relatively easy to learn, teach and play. I found its core principles very smooth and intuitive. Fully mastering it, however, can be a lifetime task. There are many different approaches and strategies to explore.

A Feast for Odin is built on the solid foundations of years of experimenting with worker placement mechanics and farming themes. Its originality is spatial puzzles that you solve on your home (and other boards). The collecting and upgrading of the tiles are done through a massive, over 60 slots large worker-placement board.

While some would argue that this is an easy way out when designing a board game, I disagree and think the slots are well-thought-out. As some demand more workers to activate, there’s a tactical element and a sense of progression present.

Although all slots are open from the start, you’ll be usually starting with the cheaper ones, and only use the more expensive ones when you have more Vikings and resources.

The actions are grouped together and are intuitive to perform. If you go hunting, you must reduce the animal’s HP’s, which is done by rolling the die as low as possible, lowering the result with weapons. Want to forge tools? Well, you need some ore first. Just as you would expect.

Learn more about the Viking people 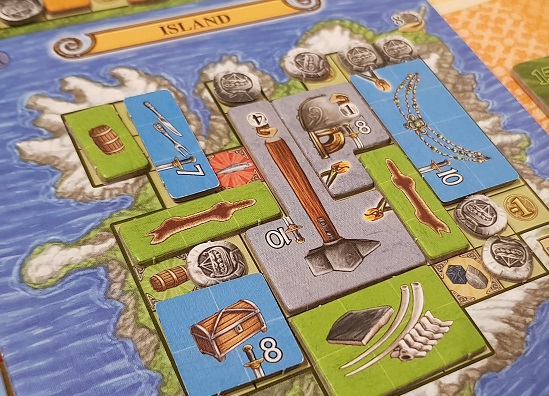 Learning A Feast for Odin

Why I am saying all this? Because I found learning the game surprisingly simple. The rulebook is near perfect. It starts with explaining the core concepts and follows with game phases the actions. Besides that, there are countless examples and tips.

You can start playing after the first read. The 12 phases of the game may seem a lot to take in at first, but most of them are merely maintenance. It’s the game’s way of making sure you don’t forget anything. And with the player aid board, which clearly marks the phase you’re in, there’s never any doubt what is going on.

You simply move along the phases and if you’re unsure what to do, you check the rulebook for that phase. It’s really that easy.

I do suggest the solo mode for your first couple of plays. Not only it’s an excellent tool to practice, but it’s also a great way to explore the game and challenge yourself. Incidentally, A Feast for Odin is one of the games that are highly recommended for pure solo board gaming.

Teaching A Feast for Odin

Likewise learning, I found teaching the game to be intuitive, as well. Of course, you need a solid understanding of the game, before you start teaching – use the solo mode.

When teaching, I go through the contents in the same order the rulebook does it. Core principles (covering the boards, income, bonuses, feast, ships), then briefly over the phases and actions.

I won’t delve into detailed explanations. For the new player, the first game is going to be a learning process regardless of how deep your explanation is. I prefer starting the game and demonstrating as we go along. I also take the first player marker at the very beginning, just to take the initiative, “follow my lead”, and make the start less overwhelming for them.

It’s important that you’re not competitive in this first learning game. Make suggestions what a good strategy is according to their occupation card and weapons (play open-handed), encourage them to take ships and exploration boards to show them where the big points are, and so on. 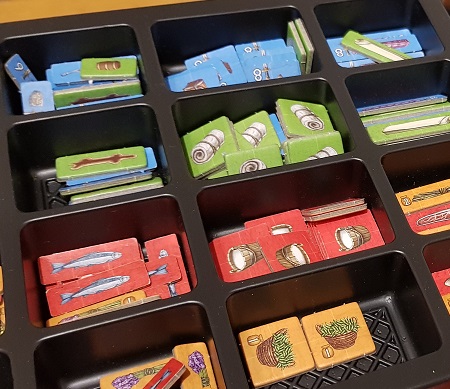 Playing A Feast for Odin

In short, playing A Feast for Odin is silky smooth and flowing. I found that after the initial learning phase, there’s not much referencing the rules anymore. The iconography, the colors on the occupation cards, the tile placement – it all just clicks and feels natural.

Even though the playing time is not the shortest – you’re looking at 1 hour for the solo game to over 2 hours for the four-player game, I was never bored. There’s always something engaging to do. You can follow other players’ actions, puzzle your home board, or simply plan your next action.

And when one player is resolving his action (i.e. pillaging), you can already start placing your Vikings and resolving yours, as the actions are mostly independent – only a few affect others.

The stock storage solution for the tiles is another thing that helps the game move along swiftly (not to mention the setup/teardown time). It’s very helpful and welcoming, particularly when most other games just throw plastic bags at you and call it a day.

Mastering A Feast for Odin

Now, this is the stage where A Feast for Odin becomes difficult. But not in a bad way (i.e. that it would be hard to come up with any successful strategy). Difficult in a good way, meaning that there is a lot of depth to tactics and strategy, and you can experiment ad try many different approaches. Think of it like chess.

While I’m nowhere there to be the expert on the subject, I am beginning to see how the cogs behind the curtains move.

First, you need a general strategy for your game. This usually revolves around your starting hand, but you can never set it in stone. Maybe you’ll draw more suitable cards later or an exploration board you wanted will be snatched away from you or a critical action slot taken.

Therefore being adaptable and being able to go with the flow is perhaps even more important. If the game is giving you one spear after another, then why shouldn’t you go whaling after all?

Although there’s not any direct player interaction, I suspect that the competition for actions slots, first player marker, and in particular, the exploration boards is going to reveal when you’ll master the game. Then, not only optimally puzzling your boards and taking the right actions, even denying your opponents the opportunity to do the same, will be important for victory.

Also, the occupation cards and the dice help make the game non-determinant. Without them, there’ll be no hidden information or a random factor. With the low-variable setup, they help with the longevity and the long-term appeal of the game. They are somewhat situational, therefore the idea is to draw more than you need and only play out those that are helpful to your strategy.

While the feast itself seems trivial at first (being surprisingly easy to feed your Vikings), it shows its teeth later. It creates a challenge – not with scarcity, but with the abundance of resources. Sure, you will feed your Vikings, but will you feed them, while allocating your resources optimally? Ideally, you’d want to leave as much food to fill the longhouses. Incidentally long, narrow tiles of food are best for both the feast and longhouses.

Finally, there’s the aforementioned solo mode, which is not only a great tool to try out different occupation cards and strategies but a reason to buy the game in the first place. It’s one of the fewest games where the beat-your-score system works. Mainly, because the end result is so measurable.

If you score well over the 100 point mark, that’s a good result, no matter how you look at it. While in other games that use a similar system, there may be elements beyond your control thus making the end score not comparative (I’m looking at you, Clans of Caledonia with your random round scoring tiles.), in A Feast for Odin, you can easily measure your success. 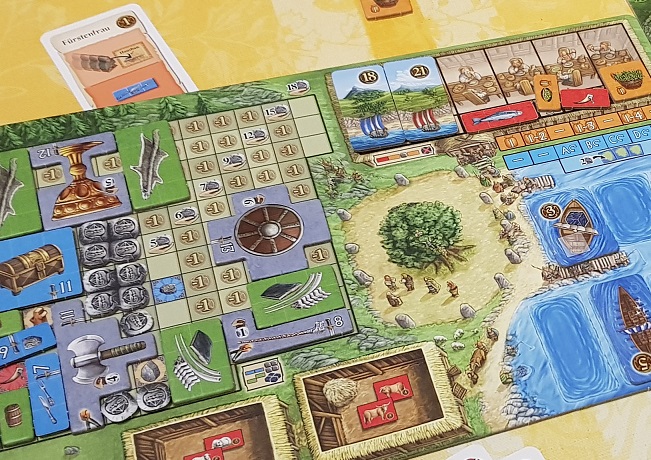 A Feast for Odin is not particularly difficult to learn, teach, or play. I’d argue it’s simpler and more intuitive than most of the comparable strategy games.

Its difficulty comes with a vast ocean of possibilities. The sandbox-y nature of the game offers many viable paths and strategies and exploring those is where the fun lies. Mastering them is what it’s difficult and many expert players are honing and arguing their approaches for close to a decade now.

One of the most dedicated players is indeed Gernot Köpke, the author of the base game almanac, and the lead developer of the Norwegians expansion. Although the base game balance is far from terrible, the expansion further refines it, adds more exploration boards and other goodies.

While expansion is certainly not needed if you’re a casual player, once you start thinking about mastering the game, you should undoubtedly implement it.