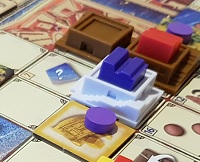 City of Ur, Sumerians, dice, ships, constructing buildings, semi-coop. This game promises a lot. Read the full Tabannusi Board Game Review to check if it delivers.

Introduction to Tabannusi Board Game Review

I have a soft spot for board games that are based on underused historical themes. The T-games series of medium/heavy eurogames from Board&Dice falls into this category. It started with Teotihuacan (Aztecs) and was followed by Tekhenu (Egypt) and Tawatinsuyu (Incas).

Its latest entry goes back even further. 5000 years into history, to one of the first cities, the Sumerian Ur. In Tabannusi: Builders of Us (tabannusi is a Sumerian word that translates as “build”) players take on roles of architects in the ancient city.

Your task is to help with its expansion. Construct new buildings, canals, gardens, and ziggurats. And of course, do it in a way that will yield the most victory points so you can become the most powerful builder and win the game.

Tabannusi: Builders of Ur – Facts

The theme is solidly implemented into the game mechanics. There’s a cool concept of extending water canals if you want to build gardens. Likewise, you need to construct ziggurats (temples) to boost your scoring.

It’s also thematic how your two meeples move between the districts. The architect just dictates what to do and leaves the actual work to the worker meeple. Meanwhile, he travels to the next district, already planning the next move.

Yet, the theme is not fully exploited and seems underdeveloped. For instance, each turn, you’ll take a resource (a die) from a barge. Though the developers didn’t bother with naming them – they’re referred to simply as a blue, yellow, green, white, and brown resource.

I know that in the end, the players are going to call them by color anyway, but I’d still like to see some thematic explanation as to why you need a certain resource for a certain action and what it represents.

It’s the same with buildings. You’ve got white, yellow, and brown. Again, no further explanation is given, which makes the whole thematic experience a little too abstract as it needed to be.

I’d like a bit more development with the theme, as I feel a lot of potential is lost, both for greater immersion and for education on the historical background a lot of people don’t know much about.

One city-building game that gives its theme a lot of love, resulting in greater immersion and education is Praga Caput Regni.

The components are – average. They get the job done and there’s nothing inherently wrong with them, but I don’t think anyone will buy this game based on looks. The same could be said about the artwork and the overall design.

I’m also not a fan of the plastic houses and would much rather see wooden blocks in their place. Also, the worker meeple is too small in comparison to the architect and doesn’t pop in the eyes immediately. Since he’s the one doing all the work, his position on the board should be more easily recognizable.

Tabannusi is one of those games with a simple core turn structure: “you only do these three things on your turn”. Yet, deciding what these things will be, depends on a lot of factors from all across the board.

At the start of your turn, you’ll take a die from a district barge. The number on the taken die determines the district your architect will move to next. After that, the number on the die no longer matters and it’s just a resource.

Next, you perform up to two actions with your worker. Actions cost resources and are different for districts. In common districts, you can lay project titles, erect buildings, and plant gardens. In port, you can claim ships and build houses, and in the ziggurat, you can build houses.

When you’re done with actions, your worker follows his boss, the architect, onto the next district.

After a barge is depleted of dice, there is a local scoring, and after five local scorings, the game end is triggered and all the districts are scored once more.

There are a lot of things to take in at Tabannusi. The actions can be quite complex and can trigger bonuses on the way, meaning there are a plethora of icons you need to understand.

Luckily, the game comes with a well-written rulebook, where every game principle, action, symbol, icon, ship, and goal card is thoroughly explained, with examples and images included. Therefore I had absolutely no issues learning the game.

The only bad thing about the rulebook is the solo mode section, which looks like it was written later and could really use some more clarifications and examples.

When you first start playing, you’ll probably be overwhelmed with the freedom the game gives you. You can pretty much go everywhere and do anything.

Consequently, after the first game, I wasn’t too impressed with Tabannusi. But after 2-3 plays, when you start getting the feel for the actions and start to understand how scoring and goal cards work, the game really begins opening up and showing its tactical and strategical repertoire. It’s one of those games that needs time to display what it’s got and you have to stick with it.

And the game’s got a lot to show. One of the more interesting mechanics is the semi-coop approach to laying project claims and constructing buildings. The construction is cheaper if there are opponents’ claims on the plots, likewise an opponent will take benefits if you construct his project.

This results in players extending plotted projects of other players, rushing ahead and finishing buildings of other players, laying gardens next to buildings for extra bonuses, and so on. Therefore, Tabannusi features high player interactivity and you’ll show a lot of interest in what others are doing since you can also benefit from it.

Another aspect where you need to watch others is when taking dice off the barges and where they’re likely to go next. If more players are interested in the same districts, the dice there will run out faster, resulting in scoring. Therefore, some districts may be scored more often than others.

This provides a lot of tactical depth, as you have to re-assess the situation all the time, look for opportunities and adapt your actions.

Every player will start a game with a different Urban card (goal cards, telling you in which districts to build houses to get bonus points). There are also Decree cards – game objectives that only give out a bonus to the first player that completes them, which produce a race between players.

The combination of these goal cards, as well as a randomized setup of special abilities from the port and ziggurat scoring tiles, guarantees a high level of variability. Every setup of Tabannusi will be different and will result in genuinely different playing styles. Also, you can usually create more than one useful synergy per game between them, resulting in multiple different possible winning strategies per game.

For example, one game building a lot of gardens will be profitable, then perhaps constructing larger buildings, constructing many small buildings, claiming ships, knocking other players’ claims off, and so on. There really are a lot of possibilities and different paths the players can take and they will differ from game to game.

An initial setup analysis is therefore crucial for success as you outline your general strategy for the game.

Once the players get a hang of it, the game runs surprisingly fast and there isn’t much downtime. And even what downtime there is, it’s not crucial, as you are constantly interested in other players’ moves. I’d say around 30 minutes per player is a good estimate for the game duration.

The game board is double-sided, with one side for 1-2 player game, and the other for 3-4. This indicates the game scales exceptionally well and plays fine with all counts. Although, as it’s betting a lot on the player interaction aspect, you will only get the most out of Tabannusi with a full table.

Tabannusi features a fairly complex automa system with 4 different bots of various difficulty and playing styles. They are card-driven (very similar to Gaia Project, i.e.) and try to simulate the human player; with all the moving and action-taking.

Although the bot principally follows the same rules as the players, there are numerous exceptions and things it does differently. You’ll be constantly referring to the rulebook. It felt I was focusing way too much on managing the bot compared to what I wanted to do – play the game from my perspective.

It doesn’t help that the rules section for solo play could use a lot more clarity and examples. Moreover, some aspects are clearly missing (how are the bot Urban cards scored) or could be explained in more detail to reduce ambiguity.

I got the impression the solo mode was more of an afterthought and it could certainly use some more development and streamlining. For example, there’s no need for the bot to move and spend resources, it only needs to place structures, markers, and score points. This could be simplified and it would still achieve the same results.

The solo mode is where the high complexity really emerges and I’d suggest only the most hardcore players play solo. And only if you came across a similar bot-managing system in the past and enjoyed it. But even the most experienced players will have their hands full and inevitably make several mistakes during the game.

Tabannusi is a game with which you have to stick. Unfortunately, its presentation is nothing to write home about and it doesn’t show what it’s capable of right away.

But if you stick with it, plow through the iconography, the exceptional game mechanics with a lot of depth and high player interaction will emerge and present a great board game. A worthy addition to the T-series. 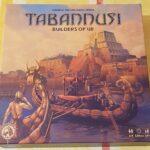