Sometimes a small, casual, and very cheap game is all you need. Read the following One Deck Dungeon Review to learn the ins and outs of this simple dice-rolling dungeon-crawler.

Introduction to One Deck Dungeon Review

The Steam platform is one of my favorite ways to try out board games, or more exactly, their digital versions. The offer is fairly large, the quality of conversions and the overall polishment of the products is relatively high, and if you wait for a sale, you can get them very cheaply.

I’ve heard only good things about One Deck Dungeon, so when it came on sale for a measly 0.81€, I did not hesitate. A small download and a couple of minutes later I was in the game.

The Rules and their Implementation in Digital Version

One Deck Dungeon is a dice-rolling game where you’re trying to beat the said dungeon deck. You select your hero (the digital version comes with 6 heroes; more are available as DLC), starting skill, and off you go, into the depths.

The heroes are your typical fantasy stuff. Archer, Mage, Paladin, Rogue, Warrior, and Mist. They differ in starting dice and special skills. Paladin for example can store joker dice on his mat, Archer can trade time for joker dice and similar.

The encounter deck works as a timer

You go through the encounter deck three times, and every time the challenges get slightly tougher. After that, you face the dungeon boss. There are 5 available, each with its own flavor that also affects the conditions of the dungeon and the toughness of each level.

The Dragon is a newbie dungeon, while Hydra and Yeti already pose a bigger threat, not to mention the later bosses, like Lich or Minotaur.

The difficulty level can be further adjusted –  you can start with some XP at low settings, fewer potions at higher settings, and so on. While these don’t make much of a difference, they allow you to earn more checkmarks (more on that later).

The encounter deck also acts as a timer. You face the boos when it runs out three times. There will be choices and penalties that cost time, which means removing cards from it. Of course, you want to stay at each level as long as possible, so try to avoid losing time. Sometimes even more than your health.

You’ll normally have a choice of four encounters. These can be enemies of various powers, traps, magical doors, and so on. If you beat them, they give you either new items (allowing you to chuck more dice), skills (special abilities), potions (abilities with limited usages, such as healing), or XP directly. 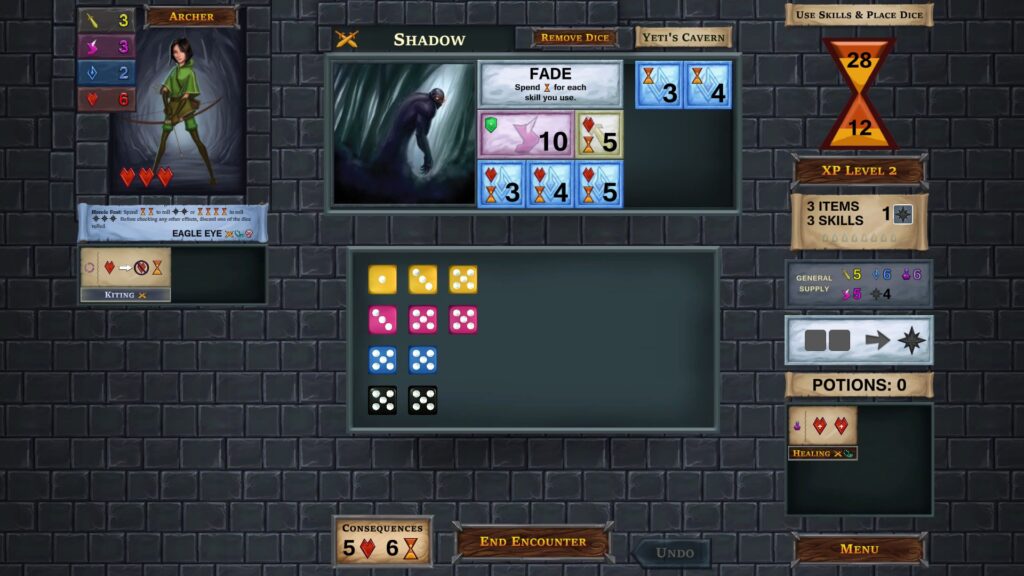 Building up your hero

Choosing which upgrade to take (building up your character) is very important for end-game success. Having more dice is essential, but skills that allow you to manipulate dice (switching colors, adding pips, and so on) are also important. The only generally useful potion is a heal. The others are situational. I usually stayed away from them, especially since all the potions use the same number of uses pool, and I like to save that for the heals.

After each battle, you will earn checkmarks for your deeds. You can spend those to add perks to a character, making it both stronger and more suitable for your playstyle. I found the progression a very interesting addition that adds to the longevity of the game and the overall appeal of each character. You know you want to max out your paladin, don’t you?

The battles themselves are an exercise of simple arithmetic. You roll your dice and then you try to fill out the required spaces as effectively as possible. Every unfilled space costs you time, health, or both. To make things slightly more complicated, there are three colors (and a joker color) of dice that only fit into their respective spaces.

Skills are there to help you with dice manipulation and using them correctly can mean the difference between winning and losing. It’s an exciting task, especially when the dice rolls are somewhat favorable.

In the opposite case, it can get slightly frustrating. Yes, you have ways to manipulate dice, but in the end, they’re still dice. Often, the rolls will be bad and you’ll be confined to damage limitation. You can still progress and earn new items and skills but have a few of those unlucky encounters, and you’ll run out of health potions (or be inadequately developed) by the time you reach the boss.

Another frustrating thing is that the skills are not universally usable. There are different encounters (monsters, traps, puzzles) and some have limited usage. The puzzles are especially unforgiving as you only roll a limited number of dice and can’t use any skills.

The Boss battle works as a series of normal battles. His/her card requires a lot of pips to fill out, so you can forget about completely filling them. It usually comes down to which one of you can hold on to his health points the longest. 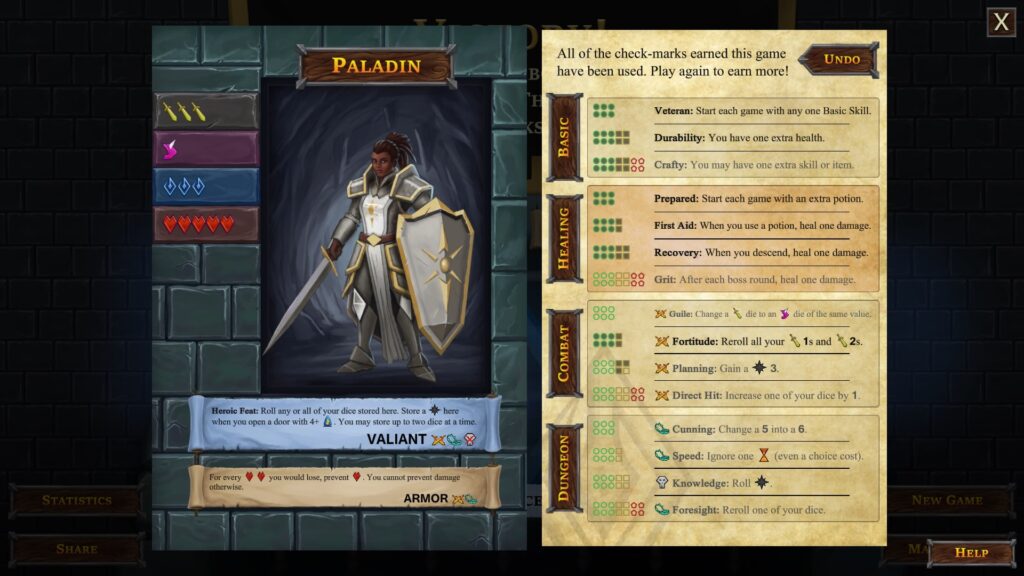 Forest of Shadows is by far the largest expansion. 5 heroes, 5 dungeons (with bosses), and 44 encounter (battle) cards is a ton of new content. While it’s just a DLC in the digital version, it is in fact a standalone expansion for the physical version. If you like what you see in the base, game, I definitely recommend it.

The Abysmal Depths is a somewhat smaller expansion. It comes with 2 new heroes (Aquamancer and Dragoon) and six fiends. Fiends are a new game mechanic – they are monsters that haunt you throughout the entire dungeon.

Expansions that add a new hero:

Expansions that introduce a new dungeon:

My recommendation is the Forest of Shadows as it’s by far the best value for money. The encounters in the base game get old pretty quickly and 44 fresh ones make a difference. Even more so in the digital version, because the games go faster (you wouldn’t play the physical version that much) and you potentially see more encounters.

The others are optional, in my opinion. I mean, you really should play the heck out of One Deck Dungeon to get bored of all the characters and dungeons. I’m not sure the game warrants that much time investment. It’s not a bad game, but it should be pretty special to still have fun after so much dice rolling.

And that last sentence sums up One Deck Dungeon fairly well. A solid dice-chucker with interesting encounters, heroes, and dungeons. But dice inherently come with a random factor that limits your strategic options and replay value, despite numerous DLC available.

But even so, One Deck Dungeon on Steam is a recommended purchase. The reason for this is the low price. The occasional casual dice rolling is fun enough to be worth a couple of bucks.