One of the more common board game buying dilemmas I keep encountering is Mage Knight vs Gloomhaven.

Deciding on buying new board games is always hard. Our time and money are limited, but there are a lot of choices, and a lot of good games, that may even look very similar (at least on the surface). The dilemma is harder when the games are more expensive and demand an insane amount of our time.

I was in this situation in the past. I did my research and I gathered a lot of information about both games. That’s why I decided to write a guide – to help others in a similar situation figure out which one will suit them best.

Both Mage Knight and Gloomhaven are exceptional board games, so this is not a comparison with a clear winner – except for you, the reader.

With the base game being out for quite a while, Mage Knight has received plenty of expansions, adding new characters, scenarios, enemies, and more. If you are looking to get into it with a clean slate, there is only one way to go – Mage Knight Ultimate Edition. It contains everything listed above, has some revised rules, and is a lot more cost-effective than buying items one by one.

As for playing it, I’d suggest starting with the elements of the base game and adding expansion elements (new heroes, terrain tiles, enemy tokens, action cards, spells, artifacts, and units) slowly, one at a time. 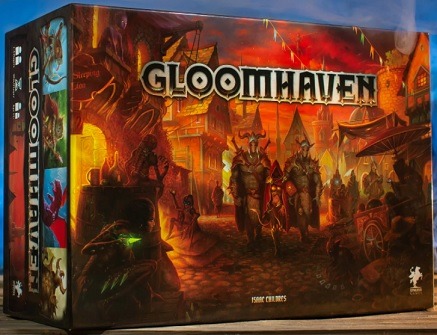 Gloomhaven is a younger game, therefore hasn’t received that many expansions (nor does it need them). In fact, only Forgotten Circles are considered a true expansion, adding new elements to the game (twenty new scenarios, that take place after the original campaign, new character class, new monster types, and fourteen new items).

If you’re in the market for Gloomhaven, get the base game. After you’re done with that, look into Forgotten Circles. Other scenarios are optional (if you even get to find them for a reasonable price).

In 2020, a prequel, Jaws of the Lion became available. It’s a simplified version of Gloomhaven. It retains all the outstanding card-playing mechanisms, dungeon-crawling, story, and character progression, but it removes a lot of fiddly stuff, like setting up.

As an entry point into the Gloomhaven universe, I recommend it very much. Read the Jaws of the Lion Review here.

Click here to read more about Gloomhaven in another article

Similarities between Mage Knight and Gloomhaven

Differences between Mage Knight and Gloomhaven

Is Mage Knight Ultimate Edition Worth it?

I hope I’ve shed some light on both games and shown their similarities and differences. Hopefully, I helped solve your Mage Knight vs Gloomhaven dilemma and you have a clear winner by now.

As for myself, I decided to go for Mage Knight in the end. I mostly play solo and the deterministic puzzle-solving was very appealing. Plus, I don’t think I can commit the time for Gloomhaven’s campaign, while I can play Mage Knight chunk by chunk.

As I’m making a revision of this post, it’s worth noting that I’ve dived into the Gloomhaven universe as well, although I’ve opted for the smaller brother Jaws of the Lion. It’s a great game and I and my life partner are enjoying the campaign very much.

I feel I have decided right. But your decision may be different, of course.

2 thoughts on “Mage Knight vs Gloomhaven”