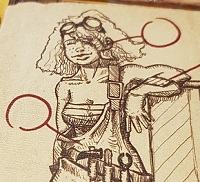 This article is a Robinson Crusoe Board Game Review. Does the highly-rated cooperative survival game live up to high expectations?

If you arrive at a party late, then you’ve got some catching up to do. This means trying out titles that were published before my time. When the opportunity arose to pick up Robinson Crusoe, a game that has been praised and highly rated throughout the board gaming community, I didn’t hesitate much.

Because Robinson Crusoe was one of my favorite books in my teens, I felt a strong connection with the theme – even more so, because I really liked Friday, a solo deck-builder, which also borrows its theme from the same book.

Therefore, I had high expectations for Robinson Crusoe. Read on, to find out, whether it lived up to them. 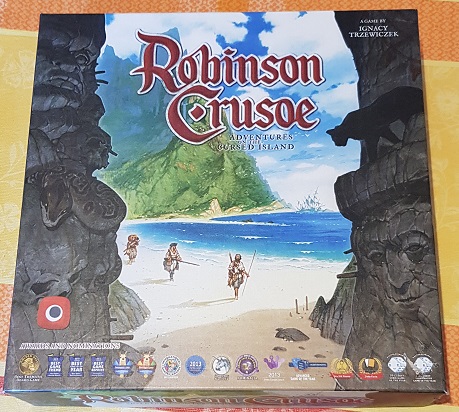 And the theme implementation did not disappoint. Just like Robinson was, you are stranded on an island in the middle of the ocean. Only this time you’re not alone – you’ve got your friends of various professions with you (cook, carpenter, soldier, explorer). You must survive, signal for help, build a raft, or whatever the scenario demands from you.

You can feel the theme at every inch of the game. The scenarios, each telling a story of its own, the diverse event cards, resources, map tiles, the dice that infuse the “curse” element. You’ll feel the brutality of the environment on your characters, their injuries, and their sickness. As they deteriorate and the moral levels drop, the joyful hike on the island will turn into a grim and gruesome struggle for survival.

The presentation is at a similarly high level. The art style suits it: 17th-century-like, it looks like the central board was sketched with a pen on a piece of papyrus. The cards, especially items and beasts, look similarly retro. The wooden discs come with stickers, and there are wooden resource tokens, as well. All in all, Robinson Crusoe has a terrific table presence.

But most importantly, the looks work together with the theme, creating a narrative both through event cards and the game mechanics. Did you decide to rush the item crafting by using only one action pawn? Then it shouldn’t surprise you when your carpenter hits his thumb with a hammer, botches the job, and possibly creates another related (negative) event in the future.

While Robinson Crusoe is basically a simple worker-placement game, there are a couple of features that make the gameplay complicated.

First, there’s the option to place one or two action pawns at a slot. While two will surely get the job done, action pawns are very valuable and often you’ll be forced to gamble and place only one. This forces you to roll dice to check if you’re successful, opening up possibilities for further events.

Second, slots are subject to all kinds of modifications: requiring extra pawns, yielding more resources, forcing you to draw an event card, etc. There are also prerequisites to some actions, particularly when crafting items.

Moreover, with the brutality of the environment and the overall shortage of material compared to things that need to be done, Robinson Crusoe is a very tight game. There are never enough resources, action pawns, or moves.

The game follows a straightforward sequence of placing pawns and resolving actions (together with shorter phases: event, morale, harvest, weather, and night), which is the bulk of the gameplay. Possible actions are:

You continue with the rounds until you complete the scenario goal in which case you win. If the allocated rounds for the scenario run out, you lose. You also lose if one of your crew members runs out of hit points and dies. Which is the more common outcome.

The rules are explained in all the details in a hefty, 38-pages long rulebook, along with many examples. Since many actions and modifications affect other actions, there are a lot of exceptions and sub-rules to everything. For the first couple of games, you’ll be browsing the rulebook more than you play the game.

Frankly, the structure of it could be better, as it’s often hard to find what you’re looking for (I hear it was even worse in the first edition). But it gets the job done, even if it’s cumbersome at it.

I also found the game very hard to learn from scratch, although teaching it wasn’t difficult. If you have someone to take you through the details of action resolving, the game’s structure and actions are easy to comprehend.

As you might expect with crumbled game mechanics, it takes a lot of tokens, decks, and other markers to run the game. Again, this is fairly natural and easy to do if you have someone with you (or after a few games), but doing it from scratch will turn many players away.

Especially, since the game doesn’t come with a good storing solution. They just threw everything in plastic bags. I don’t mind those when the component quantity is low. But Robinson Crusoe has one of the highest component counts I’ve seen and this makes setup and teardown such a lengthy and grueling endeavor, that you could easily have played another game in the meantime.

I’ll admit that I left the game on the table for the first couple of times I played, and when I finally put it away, it didn’t hit the table again in months, such was my disgust in having to set it up.

Upgrading the game with a Folded Space insert

When it comes to custom inserts, I’m a strong advocate of Folded Space. Their Evacore inserts are light, easy to assemble, and durable. The engineering behind them is of the highest standard – they are designed to fit perfectly in the box, hold all the components, and act as trays during the gameplay.

Not only does the insert hold all the components comfortably, but there are also a few spare boxes – room for Voyages of Beagle expansion.

Having an insert is a much more convenient way of storing the game, but the most important advantage is that it slashes the setup and teardown time drastically. For me, this insert made the difference between wanting to play or not.

I believe it’s absolutely mandatory to develop some kind of storage solution if you desire to play Robinson Crusoe on a regular basis. I can assure you, you won’t go wrong with Folded Space.

A Tough Coconut to Crack

So, do all these features create a good board game together? Yes, but it’s a game that is not for everyone. First, a few observations.

Robinson Crusoe is a very hard game to win. It’s not hard to play (once you internalize the rules), but from the competing aspect, it’s extremely challenging, often unfair, and very random. Even if you play perfectly, strategy-wise, there are so many factors you can’t predict or influence, that it won’t be any guarantee for success.

There are also means to reduce the difficulty, such as adding extra action pawns in the form of a dog or Friday, and you can also adjust the composition of the starting event deck to your favor. This helps a bit, but nothing drastic.

When you play a scenario for the first time, it’s also hard to play optimally, since they differ quite a bit. You’ll probably complete it on your second or third try. Despite the game “only” having seven scenarios, this is a lot of content. Even more so, since every time you play the same scenario, it pans out differently, because of all the event cards that come into play.

All this means you don’t play Robinson Crusoe as a strategic challenge, but rather as a narrative experience. It’s not about winning, but about creating stories from the cursed island. You’ll remember how your cook ate bad fruit, which put a poison marker on his stomach, which meant he felt sick a couple of turns later, thus reducing him to just one action pawn.

Or when another member got lost exploring and had to spend the night outside the camp. During that night he heard mysterious voices in the jungle. A few turns later you’ll have an opportunity to go hunt for that mysterious voice which turned out to be a wild hog.

Or that third time when everything went (almost) to plan. You’ve collected enough wood and food, crafted a few useful items, explored some more of the island, and gone to bed with full bellies. Behold, the weather dice. Suddenly the storm hits your camp, and because your roof level wasn’t high enough, your people lose hit points and morale, suddenly throwing your plans into a downward spiral.

Can you endure the beating?

But even for them, the gameplay will often be frustrating. You’re being bombarded by bad events from all sides. It’s very hard to even stay alive, let alone work towards the end goals. Therefore it often feels like a futile struggle. You know you should work on several fronts, but you can only afford so many, so you’re constantly patching up or playing catch-up.

Robinson Crusoe works well from all played counts from 1 to 4. It even works very fine solo (I recommend playing multi-handed), but the game thrives on creating a narrative. And this narrative gets much more immersive when you share it with someone else than if it is just in your head.

I’ve had a good experience playing it with my 5 yo. I took care of all the game mechanics and talked to her about what’s going on with our characters. She felt included in the story and actively suggested what we should focus on next and how to spread our resources.

I feel like the 2-3 players is the sweet spot. It works fine with 4 players too, but since the players decide how they will divide actions pawns in a discussion together, there’s more chance for quarterbacking (telling others what to do) and subsequently of players feeling unincluded.

When it comes to criticisms – there aren’t many. The game is what it is – you’re either going to love it or hate it. You know what sort of a player you are and what games you like. For what it does, it’s designed to very high standards and it’s rightfully high rated.

The only thing that kept nagging me in the back of my head was: couldn’t they achieve the same (or almost the same) experience with a more streamlined design? With less complex rules and fewer components?

That way the game would be even more approachable and more people, even casual players, could enjoy it. I feel there are elements that could be chopped without much harm to the gameplay.

Robinson Crusoe: Adventures on the Cursed Island is an excellent cooperative board game, but its target audience is specific. It’s for players who like challenges that are often insurmountable and can take multiple beatings in a row.

In exchange, you will receive a board game, meticulously designed to provide you with narrative adventures, that will entertain and remain in memories.

Are you in this group?

>>>You can buy Robinson Crusoe on Amazon<<< 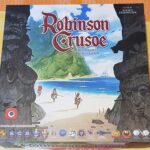