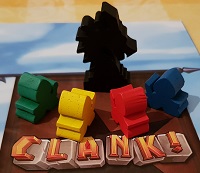 Read this Clank Board Game Review to learn about one of the most entertaining board games of the last decade. What makes it so good?

Introduction to Clank Board Game Review

There are a lot of good board games that create a great gaming experience, but only a few of them are truly groundbreaking, the ones everyone is talking about.

Clank! from 2016 was one such game. It combined elements of deck-building and push-your-luck systems to create a unique blend. A blend that was also easy to learn, yet possessed a lot of depth, especially in the deck-building aspect.

But most of all, Paul Dennen managed to create a fun experience for everyone. From picking up new cards – which feels like cherry-picking candy, to the excitement of drawing cards, to the absolute thriller of reaching for the cubes when the dragon attacks.

Let’s take a look at how Clank! achieves this and if there are any cracks in its facade.

Published: 2016
Designer: Paul Dennen
Players: 2-4, works well with all player counts.
Playing time: 45-90 minutes, depending on how experienced the players are.
Complexity: light-medium 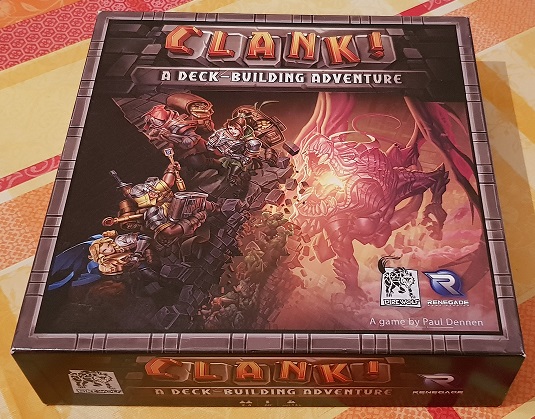 Theme and Concept of Clank!

What makes Clank! stand out is how perfectly incorporates deck-building and push-your-luck mechanisms into its gameplay. Here’s how it works.

You play as a thief, ready to venture underground and steal valuable artifacts right in front of the dragon’s nose. You start ill-equipped, but soon you’ll add cards that will make you move faster, fight more powerful monsters, and buy even more powerful cards.

But the dragon won’t just sit still and here’s where the push-your-luck element kicks in. Certain action cards come with a price in clank – that is the noise the valuables you’re carrying are making.

Each clank you generate means you have to put a cube of your color into the dragon’s bag. Then, at certain triggers (when such a card arrives on offer) the dragon attacks and you have to pull a number of cubes out.

A cube of your color costs you 1 hit point – accumulate 10 and you’re dead.

The key is striking the right balance between building your deck and bloating it, grabbing all the loot possible and containing your greed. How deep into the dungeon should you go? The rewards are bigger down there, but will you have enough time and health to come back to the surface?

The components are solid, I’d say. Nothing spectacular, but still nice. The meeples and cubes are wooden, the map looks fine and is not cluttered.

The illustrations on the cards are pretty good, and I especially like the style. Clank! is not a game that takes itself too seriously and encourages a relaxed atmosphere. Card illustrations, and even more so, the flavor text on them, resemble this. Some of them are just hilarious – check out the pictures.

How to play Clank!

Each turn you will draw five cards from your deck. Starting deck consists of 10 cards and is not very good, to put it mildly. On your turn, you must utilize all of the face-up cards.

On them, you will find three symbols.

Most cards also come with a text, which must also be performed. These can be “draw X cards”, “get money”, or even negative, like “+1 clank”. This makes Clank! fairly language-dependent, which is a bummer for those of us who have non-English speaking friends and family that would otherwise find Clank! a great game.

The order you perform the operations on the cards is up to you, which allows you a level of freedom, instead of being guard-railed by the cards. For example; you could first move and explore a secret token and then decide how to use your swords – maybe you find something useful. It’s just enough freedom to keep you occupied, yet it still keeps the turns moving along swiftly.

There are two rows of cards on offer – generic upgrades and the dungeon deck. Generic cards are always the same and consist of decks of companion (boosting swords), explore (boots), or end-game points cards. There’s also a generic goblin that is always ready for defeat, should you have some swords left on your turn. 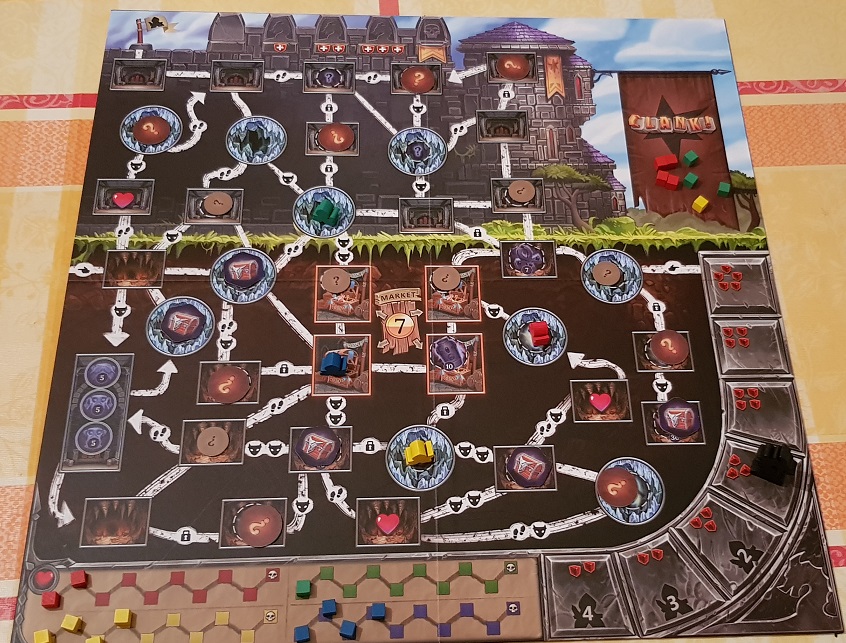 It’s all about the dungeon cards on offer

The dungeon deck is where the fun begins. There are six cards on offer at any time, with new cards coming out as the previous ones are bought/discarded. Together with cards that you can add to your deck, there are also monsters (which you can defeat with swords and receive rewards) and one-time-use devices. Both of these types of cards are discarded after use.

The row is replenished after a player’s turn. Some cards also come with a dragon symbol and now it’s time to keep an eye out for it. If one or more new cards on the offer have a dragon symbol, the dragon attacks. This means all the clank cubes on the board are put into the bag and a certain number of them is drawn out, directly affecting players’ hit points.

The Dragon is getting upset

The number of cubes depends on the level of the dragon – the more artifacts or eggs you take from him, the angrier he gets. You can control his attacks by buying from the offer row carefully – the more cards you buy, the more get replenished, increasing the odds of a dragon symbol coming up. This is especially important in later stages when people are clinging to the last of their hit points.

The end game is interesting as well. The map is divided into underground and overground. If you die below the dividing line, you lose the game immediately. Contrary, dying overground qualifies you for end-game scoring, but you don’t get the bonus for coming out alive.

When the first player escapes the dungeon, sudden death kicks in. The dragon attacks every round now, with increasing intensity, leaving the remaining players only a few rounds to get to safety. 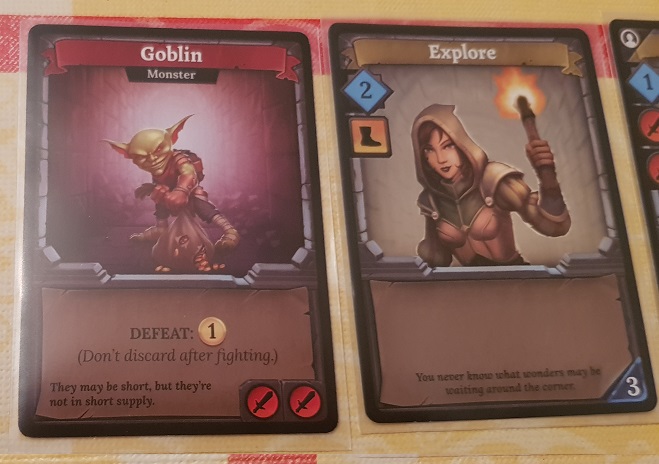 I believe Clank! is near perfection when it comes to board gaming design. Everyone I introduced it to, enjoyed the gameplay immensely. Even players new to modern board gaming grasped the rules fairly quickly, making it an ideal family game.

Contemplating how to spend your precious skill points is one of the most important aspects of Clank! – but also one of the most enjoyable. There’s plenty of variety and useful cards, there are some cards that are situational, some are a bit of a gamble, some speculation, and so on. It’s rare to find anything useless on offer and it’s easy to fall into a trap of bloating your deck when each time you shop feels like standing in front of a shelf of shiny toys.

But careful and thoughtful deck-building is encouraged and rewarded. A couple of Companion or Explore cards, then move to stronger cards and add a few artifacts and secret tomes toward the end. A well-built deck will mean you’ll always have powerful moves available and your strong cards will come around more often.

All players will feel the tension that builds up toward the end. You’re all loaded with booty, and one of the players is already heading out, while you’re at the crossroads. Should you buy a backpack and go a bit deeper for one more artifact or should you head back up now? How much clank do you have in the dragon’s bag? How many hit points do the players have left? Do you feel lucky?

And then the escape. You’re on the last drop of health, sudden death has started – will you make it at least above the ground level? Or will your buddy buy as many cards from the offer as he can, with the goal of inducing another dragon attack?

Moments like this are what keeps Clank! an engaging game for the whole group and even if you lose, you will have fun. If not for anything else, in finding irony how you almost brought all your wealth above ground, only to be killed one space too early, eliminating you from scoring.

Since you always draw five cards and resolve all of them, this means you can prepare your turn in advance, making the game flow even faster. A group of experienced players can really benefit from this. 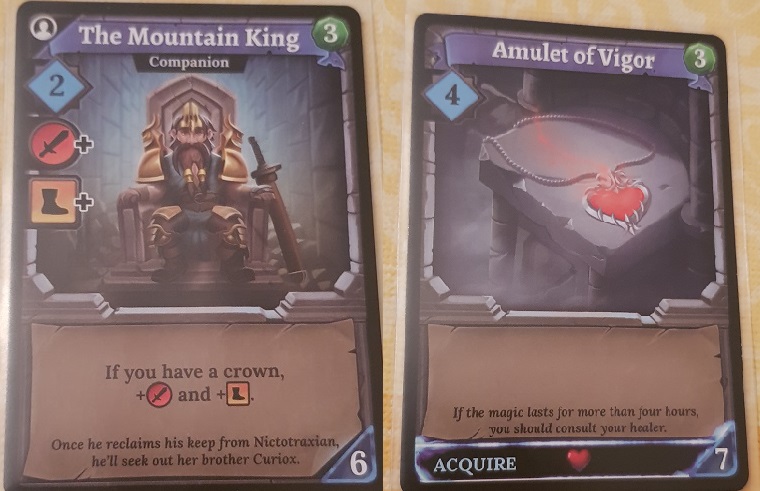 If the game has any negatives, then it has to be the lack of variability. The base game only comes with two maps, one basic and one more advanced. These can grow old fast, as well as the deck of cards, which you will see all of it too quickly.

The lack of variability does not mean a lack of replay value though – the game is still great after multiple plays, only the content gets a bit stale.

Did someone ask for maps? – Expansions

And with that thought, we get to our next point, which completely eliminates my only negative thing about Clank!. As long as you’re ready to spend more money, of course. Expansions in chronological order:

Expansions that can be used for multiple titles:

You can check out the full list (including promo cards and expansions for Clank! In! Space!) on BGG. 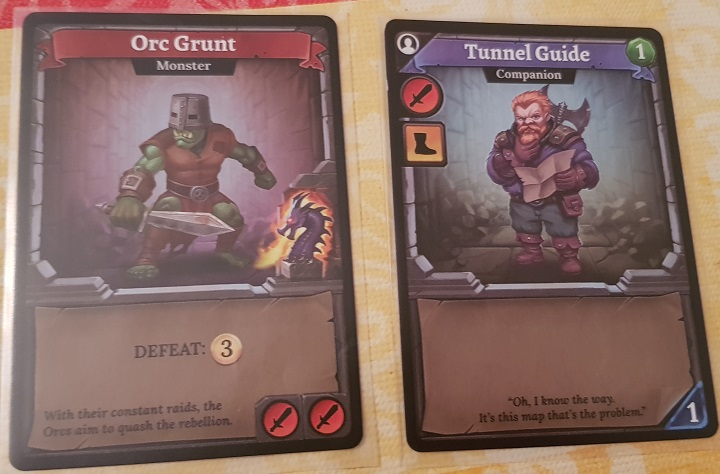 One more thing to add is that there is also an excellent companion app that allows you to play the game solo. The base game, Sunken Treasures, and The Mummy’s Curse are supported, as well as Clank! In Space!.

I’ve tried it out and it works perfectly fine, although I’d definitely rather play against another human. Clank! is not an ideal title if you’re looking for a strictly solo experience. But it’s free and definitely worth checking out if you occasionally board game solo.

With everything written so far, it’s not too hard to guess that Clank! is one of my favorite board games and why that is. It perfectly combines the two mechanics (deck-building and push-your-luck) that I really love, wraps them in a light-hearted theme, and makes all of it accessible for the entire family.

It’s true that if you play often, you’ll need to add an expansion or two, but those are quality products that add to the value of the game. They’re not expensive and you don’t have to buy them all at once.

I’ve tried Sunken Treasures and can confirm that it’s excellent and well worth the money. I’ve also enhanced my copy of the game with a Folded Space insert, which is great if you own (or plan to own) expansions.

Bottom line – I wholeheartedly recommend Clank! to everyone from families to hardcore board gamers – it’s a fantastic game! 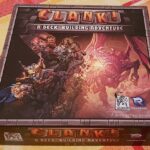