This article teaches about Carcassonne with expansions, specifically the first two expansions. The second part is about how the Carcassonne gameplay is executed online on AsoBrain.

This is a follow-up on two of my previous article, the one about Introduction to Carcassonne and the review on AsoBrain: Xplorers. I’ll be looking into the first two expansions, as those are the ones that are available on AsoBrain.

Sometimes simply known as The Expansion, this was released in 2002 and is the first of many expansions. It brings three new elements to the gameplay: 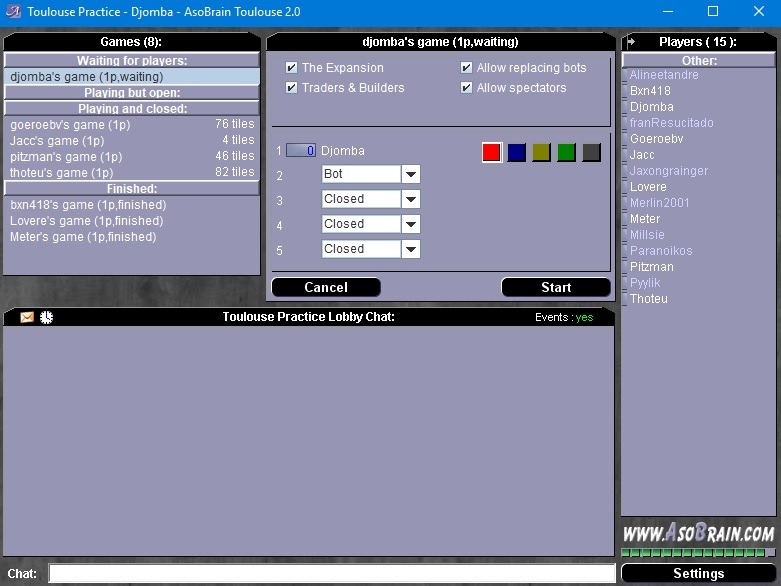 I assume you are familiar with AsoBrain by now. If not, read my previous article. On AsoBrain, Carcassonne is called Toulouse. You are using the same account as for Xplorers, only the client is different (still Java-based). Ranked and Practice servers are available with Tournaments available occasionally (rarely rather).

You can join an existing game (although a bit harder to find as on the Xplorers’ client) or create a new one. There are options to play the base game, including Inns & Cathedral (simply called The Expansion), Traders & Builders, or both.

No other expansions are available (not even The River mini-expansion, which is by default now a part of the base game in the tabletop edition), which is a big shame. It would be great if the game would receive some love and development, as there are a lot of expansions for Carcassonne available.

Bots are on the weak side

Bots are readily available, but for the skilled player, they are a bit weak. They don’t focus on the pastures enough. You can increase the challenge a bit by adding more of them. That makes your influence on the board smaller and makes the game more even. Robots do act fast and are an ideal spare partner for a quick game. One can be finished in 5 minutes.

Humans pose more of a threat, but the game is still smooth and fast. Most of them know what they are doing, since this a very niche online board game, therefore mainly good players play it. Expect more of a challenge here.

The user interface is simple: left click to select a tile, right-click to rotate it, then left-click to place it. Color around the tile will tell you if it’s legal to place it. After that, you have the option to place a follower. Very fast and effective, without unnecessary complications.

A regular and large follower on Toulouse should be a bit more distinct.

Visuals are functional but not much more than that. For example, the tabletop version is really stunning compared to this. Pastures are just one big green plain without any textures or details. Zooming out is done automatically as the board gets larger.

A nice feature is the ability to hover your mouse over a pasture and it will show the exact boundaries of it and how many followers each player has on it. It works similarly for roads and cities.

This is also a great training tool, as understanding the borders of pastures is something new players struggle with the most in Carcassonne.

Of course, the computer takes over all the scoring calculations, so that’s one time-consuming element of the game taken care of. 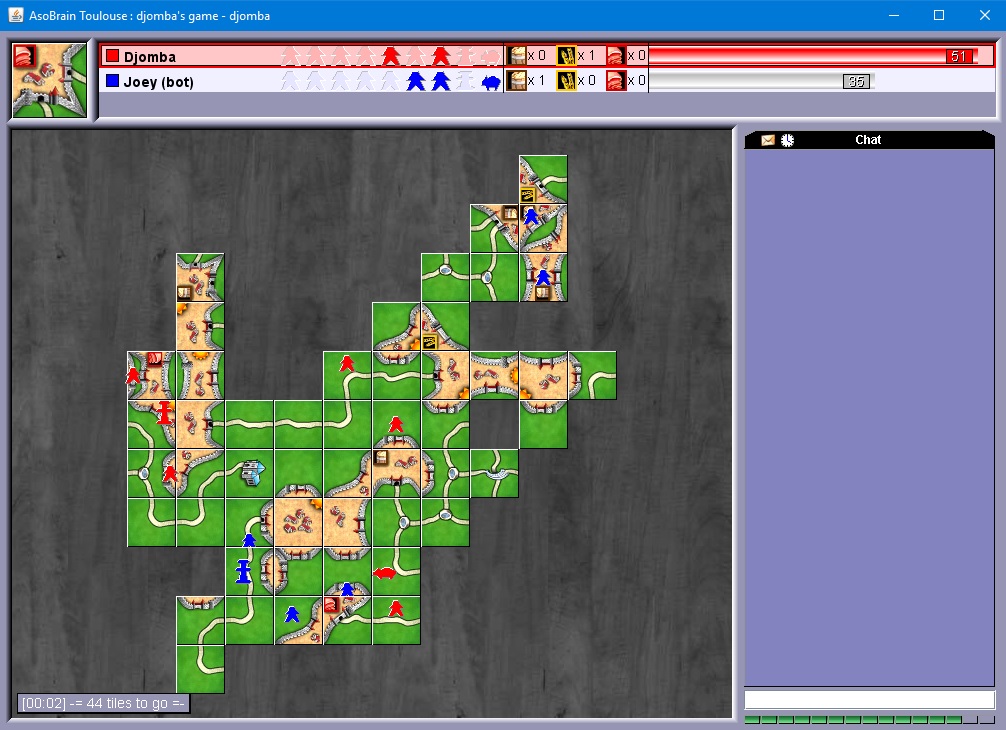 Toulouse on AsoBrain is a great place to learn and refine your Carcassonne skills. Personally, after a couple of games, I find it a bit dull. The lack of players and expansions makes me lose interest. But for some reason, the next day, I’m always back for more, even if it’s just for quickie against bots.

This is all completely free, let’s not forget. There is nothing stopping you from trying. Well, except for the 5-day waiting period.

Click here to learn about a similar tile-placement game, Vikings.

If you have any comments on Toulouse, Carcassonne in general, or this article, please leave them below. Also, comment if you would like an invitation to AsoBrain to shorten that waiting time.

18 thoughts on “Play Carcassonne with Expansions for Free Online at AsoBrain.com”