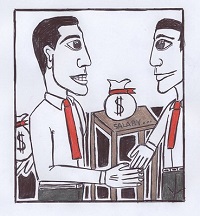 Many modern board games offer a superb mechanical experience, but often they lack in the one area we first started playing board games as kids – player interaction.

Introduction to 10 Best Negotiation Board Games in 2023

Today’s article features titles that have a very strong player interaction component, specifically when it comes to negotiating the price or bartering. The quality of these games relies predominantly on the group you’re playing with. They can be unforgettable with the right bunch – or a grueling event if the group is formed of shy introverts.

Pit deserves to be mentioned just for the sole fact that it’s present for almost 120 years. It’s an old-school family game, very simple and instantly recognizable.

The deck consists of 63 cards (7 commodities, with 9 cards each), with later editions introducing Bull and Bear cards (wild and penalty cards). The goal is to collect all of one commodity. Players offer trades only by shouting card numbers – the commodity is to be deducted by the players.

Barter with one another in this fast-paced board game in the hopes of getting the commodity you wanted! Up to 8 players can play, ensuring a frantic, Wall Street-like experience!

There’s no need to introduce one of the most played and well-known board games. It’s also one that is most dreaded in “hard-core” board gaming communities, to the point where many are embarrassed to admit they played it and enjoyed it.

I’ve had many fun and unforgettable moments in Monopoly and I’m not ashamed to admit it. Mostly, it was from the negotiation/bartering part.

In Monopoly, there are no restrictions on which property you can sell, buy, or trade. Or at what cost. The sky is the limit and with the right group, it can still be an excellent experience, although mechanically, it has long become obsolete.

Settlers of Catan has been the entry point into modern board gaming for many of us, myself included. The theme was fine for the time it came out, but since then, the colonization and exploitation of new lands have been reused and recycled many times.

So, you settle on a hexagon island and you get resources, depending on where your settlements are (and a touch of good fortune with a roll of the dice). In order to expand, you need to build more roads and settlements. But it’s unlikely you’ll have all the necessary resources yourself – you need to trade with other players for them.

In Catan, trading is slightly restricted. Since you can always swap the resources with the bank with a ratio of 4:1, there are no extravagant offers. Also, only the active player can trade, which helps reduce the chaos.

Trading is vital in Catan, especially in the early stages. It helps create the feeling that you’re not alone on the island and this player interaction was one of the key features that made Catan so successful.

Bean farming. How’s that for an original theme? In Bohnanza (Bohne is German for bean), players try to collect sets of beans of different values.

The trick is that you can only collect a limited number of sets at any time and your deck must be played out in order, meaning there will be a lot of cards you don’t need right now.

What to do with them? That’s right, you trade them away. Negotiate with other players for present and future cards. Trading is quite liberal, providing opportunities for ingenuity. Bohnanza is a small and very cheap gem. Or should I say bean?

Moonrakers, an outlawed faction in a sci-fi universe is seeking a new leader. Can you be the most cunning player and earn the most prestige?

What is essentially a pretty standard deck-building game in which you try to accomplish objectives to earn victory points and other rewards, Moonrakers has one element that sets it apart.

You can complete objectives cooperatively. This is almost mandatory for harder ones. What is interesting, is that you can freely negotiate who will complete which part, how the rewards will be split, and who will be hit with the hazard dice.

This requires a lot of political skills and it works perfectly with the theme. If you’re to become the leader of Moonrakers, you definitely need to put other players in your back pocket.

There are new chefs with their restaurants in town! More specifically, up to 6 of them, and only one can have the restaurants with the most likes on social media. Who will it be?

Rival Restaurants is a fast-paced set-collection game, where you try to collect resources for your recipes. After players collect money and decide where to move (i.e. you might move to the Fruit stand if your recipe is fruit-based), there’s is a one-minute time window, in which players can buy and barter freely.

While they can buy from the location they’re placed on, there are also auctions for contested goods, as well as trading between players. The cooking phase follows, and you can now turn your ingredients into food and earn those precious popularity points.

To further increase the frenzy and chaos, each chef comes with a special power, and there are action cards to spice things up. Rival Restaurants is not for players who like to take their turns in peace, but for those who can juggle five different recipe ingredients while walking on a tightrope.

Welcome to the 13th Century Nottingham market, the time of Robin Hood, King Richard, and Prince John. It’s time to trade and earn some cash. You can do it legally, but it’s far more lucrative if you sneak in an illegal good or two.

One player is the Sheriff (players take turns for this role), while the rest try to sneak goods, packed in envelopes past him. This is done by presenting the envelope to the Sheriff and declaring what is in it (which may or may not be true). This can be accompanied by a bribe and/or other promises.

The Sheriff can open the envelopes, but if the players didn’t lie, he pays a penalty. If players sneak the goods by successfully, they get paid their worth.

Bluffing, negotiating, playing the players, and calling the bluffs are the name of the game. Play this with your poker group!

3. Sidereal Confluence: Trading and Negotiation in the Elysian Quadrant

We’re back to sci-fi waters with our next title. Sidereal Confluence is a strategic, card-driven board game, where up to 9 players (the sweet spot is around 5-6) each control a race in the Elysian Quadrant.

The races have come together for economical reasons, and their goal is to form a trade federation, not wage war. Each of them has a unique deck with different means of earning victory points. But to fuel your economy and fulfill victory conditions, resources are needed. Resources that are often in the hands of someone else.

You can see where this is leading. Unrestricted trading. Not just resources, almost anything goes. Colonies, ships, use of technologies, you name it. It’s a big part of the game. You need to trade, but you don’t want to give too much to anyone. It’s like dancing on a knife’s edge.

We’ve now arrived in 16th-century Genoa. The Italian port is experiencing an economic boom, and you play as traders, looking to take advantage of the favorable situation.

Genoa is a fairly standard eurogame where you manage resources to fulfill orders and buy property to convert them to victory points. What sets it apart is a very strong player interaction component.

Everything in Genoa is negotiable. Want to use a building, that is owned by another player? Barter over rent first. Want to control where other players move the merchant? Try bribing them.

You can make small deals or complicated deals. You can oblige them or not. The negotiation part is so integral to the gameplay that it literally is the game. It would be the ultimate negotiation board game if it weren’t for the next title.

New York in the 1960s. Immigration from China is on the rise and it’s mainly concentrated in one area – the so-called Chinatown. You’re one of the immigrants, looking to build a successful business and fulfill your American dream.

In Chinatown, you pursue properties around the blocks. Stores, restaurants, and factories give the most income when the same type of buildings are adjacent. Obviously, space is limited, which opens up a lot of trading possibilities.

You can negotiate over everything; locations, property, money, or any combination of those. Your goal? Complete sets of shops for maximum income and destroy your competition.