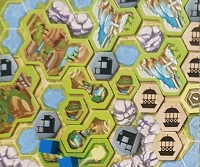 Ark Nova has risen to the top of board gaming charts as a phoenix. Although it was originally published in 2021, it is still making a huge impact in 2022. It seems everybody is either playing or talking about playing it.

But the game is not without flaws. Reviewers mostly grudged the long playing time, low player interaction, and dependence on card draw. This naturally implied that the game is best suited for lower player counts, particularly for two players, but also as a solo game.

In the following article, you can find out about the problems of the original solo mode and then how the ARNO fan-made mode tries to approach solo play. Does it triumph over the original?

Ark Nova does come with a solo mode straight out of the box, which functions perfectly fine, but it does have some design flaws engrained.

Probably the largest problem is that it changes how the game feels. A multiplayer Ark Nova is designed to feel like a “theme” video game, with the theme being zoo-building. You get a piece of land, you start building attractions (pens and exotic animals), you get income from visitors, you reinvest and upgrade your park, rinse and repeat.

What this system provides is relative freedom on what you are able to do – it’s what we like to call a sandbox-type of game. Do you want to build your zoos around reptiles? No problem. Family-friendly petting zoo? Sure. A bit of everything? You can do that too.

Ark Nova comes as close to that concept as it’s possible in a board game. Its main limitations – that it eventually has to end, and that you can’t freely choose from animals – are just constraints of the media. Otherwise, this is free roam.

But the original solo mode breaks this immersion by changing the flow of the game to a more rigid one. Breaks, the income rounds that you could avoid or trigger on purpose, now come at pre-determined times, dictating how much money and when it will be available.

This results in having very little cash at the beginning to getting income every few turns towards the end, showering you with money. Together with a hard-capped number of turns, and dependence on cards that come along (in particular, the conservation projects), this creates a narrow corridor on what you are able to do.

Sure the mode plays fast and is challenging and fun. But the approach that you must take is substantially different from a multiplayer game. It almost feels as if you’re playing a different game.

One of the players that shared a similar feeling for the original solo mode, is a BGG user named anke79. He went beyond the call of duty and created ARNO (Artificial Randomized Neutral Opponent), a system that simulates a human player with a simple die-driven action selection.

The completely free print-and-play version (all you need to print are 5 cards and instructions) is available for a while now, but I’ve stumbled upon it only recently. Obviously, I was immediately intrigued. Let’s see how it works first.

Instead of racing to cross your markers before the turn counter runs out, you now actively compete for victory against a bot – or more of them, if you like to try that out (you can even include ARNO bots in a multiplayer game).

Each bot comes with 5 action cards which are manipulated under his board in a standard way. On its turn, a die is rolled, and he picks an action from slots 2-5 (ones and sixes are re-rolled), carrying out the action depicted on the card and moving that action card into slot 1.

Although ARNO doesn’t build pens, take money and sponsor cards, the action cards allow the bot to advance on appeal, conservation, and reputation track, as well as gain cards (that act as icons for your actions), contribute to conservation projects, upgrade cards, and use workers.

This creates a remarkably accurate player imitation with minimum maintenance. It will initiate breaks, snap cards from the display, and block conservation projects, giving you the illusion of a human player. This helps retain the original sandbox spirit of the game, thus mostly removing my main issue with the vanilla solo mode of Ark Nova.

Besides the number of bots, you can also adjust the difficulty level of each one. There are 3 levels available. The difficulty is scaled properly – currently, I feel as if the medium suits my skill level great, while the hard mode requires near-perfect play and a bit of luck to beat. Easy mode is for learning or really casual play.

The level of difficulty determines roughly how many turns it takes the bot to reach victory conditions. But this is not a hard number, as it greatly depends on how the die rolls. This helps to create uncertainty towards the game’s end and brings the game closer to that multiplayer feel. Is ARNO close to victory? On a lucky die roll, you may get an extra turn or two – or the game can end right now.

Not all is perfect. There’s been a hot debate about whether the bot should use weighted die rolls, implying that the actions further to the right should have higher odds of rolling. In the end, the author decided to go against it for simplicity’s sake, although there’s no obstacle if you wish to try that variant.

I think he made the right choice with this one. Slightly more problematic is that the actions the bot takes (here, I mean the cards he snaps, the conservation projects he backs, the cards he upgrades, etc.) are random and not dependent on the game situation or a larger strategy.

In practice, this means he will back (and get points from) a conservation project he doesn’t even fulfill conditions for or draw a card that makes no sense in the current game state.

This does kill the immersion slightly. But only slightly – and it does come with the huge benefit of simplicity. I understand a more complex AI would take a lot more work to develop and manage, and for very little gameplay benefit. (I’m looking at you, Tabannusi.)

Other than that, the pacing of the game is all right. Yes, the bot will usually receive too many conservation points in the beginning, but towards the mid-game, it evens out and you get a nicely balanced competitor.

Although ARNO is not a perfect bot, I once more agree with the simplistic approach. It’s incredibly easy to manage – you just roll a die and carry out what it says on the card. Despite this, it manages to simulate a human opponent surprisingly accurately.

Its difficulty is adjustable and the open-world feel of the original game is retained. If you play or want to play Ark Nova solo, I cannot recommend ARNO enough.

Further reading on solo board gaming: 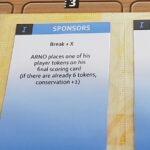