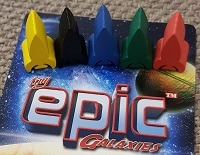 In this Tiny Epic Galaxies Review find out whether the highly acclaimed title is the best of the series. Are the galaxies really that tiny and epic or is everything a myth? 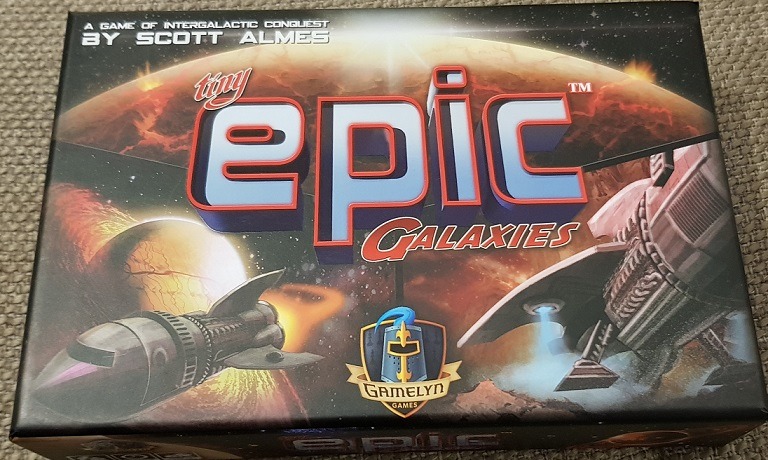 If you click on an affiliate link and buy something, I will earn a commission – I am a member of the Amazon Associates program.

Every now and then I browse local ads to see if there’s a board game worth buying. You can get near-mint condition board games for a significantly lower price than brand new. So I did not hesitate much when Tiny Epic Galaxies, the top-rated board game of the Tiny Epic Series became available in an ad.

The game arrived in an excellent state and the first thing I noticed is that they took the tiny part seriously. The box is smaller than usual. It doesn’t exactly fit in a pocket, but a jacket or a side pocket on a backpack could accommodate it easily.

There are not many components, but what is there, is of high quality. OK, the player boards and the wooden pieces could be a bit larger. They’re a bit clumsy to handle, especially for us that have larger hands. But it’s not a major issue, you just have to be a bit more careful when moving them around.

The custom dice with engraved symbols look stunning and are a joy to chuck around.

Space is not as lonely as you would have thought

Each of the players controls a galactic empire, which competes with others in colonizing new planets. While the theme is pretty generic, it is well-implemented. The things you do (fly rockets around, gain resources, use diplomacy or economy to colonize planets, activate planets’ special abilities) make thematic and gameplay sense.

Being a space game (you’d expect a lot of black color), the game actually has quite colorful artwork and looks pretty attractive. The player pieces are quite detailed, too.

Your player (empire) board is what your game revolves around. There are two resource tracks on it (Energy and Culture) and your overall Empire rank, which directly determines how many dice and ships you can use and how many bonus points you receive at the end.

Upgrading your rank is definitely something that must be a high priority during the game. You can do it by spending the required amount of energy or culture.

A number of cards (number of players +2) will be displayed in the middle of the table. These represent planets available for colonization and are replenished as planets get colonized and moved to a player’s private possession underneath his board.

You’ll also receive two special mission cards, out of which you pick one. These side goals can yield extra points at the end of the game if you complete them.

How to play Tiny Epic Galaxies

Each turn begins with rolling your dice. You start with 4, but this can increase to 7, as you upgrade your empire. You can re-roll any number of dice for free once. Each subsequent re-roll costs 1 energy.

During or after the re-rolls you also resolve the dice you decide to activate. Let’s see what each of the six symbols does:

Each of the colonized planets gives you victory points. Some take longer to colonize, but give more points, and vice-versa. You have to do a bit of basic maths, as the game ends when the first player reaches 21 points. It usually takes 3-4 planets to do so, combined with points from your empire rank.

After each of the players has played an equal number of turns, the game ends. Special mission cards are revealed and you can get a few more bonus points that way – if you achieved your goal, of course. The player with the highest score is the winner.

Due to its small footprint, easy-to-understand rules, and engaging gameplay, Tiny Epic Galaxies has quickly become one of my go-to games when introducing new players to the hobby. I’ve also used it extensively as a quickie solo game – it offers quite a challenge and excitement in under 30 minutes.

And if you’re a bunch of experienced board gamers, Tiny epic Galaxies has you covered too. It may not be your main course for the evening, but it’s a great starter, offering many tactical approaches and ways to mess with your friends.

I can’t really resent the tinyness of the components much – after all, it’s in the name of the game. The game doesn’t have any significant shortcomings, and for the price they’re selling it, it should be in the repertoire of every board gamer.

Check out more gateway board games: 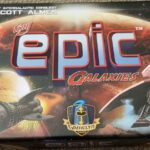