Racing is a popular board game mechanic, particularly with family-friendly games. How does Bayou Bash, a 2021 contender from Wyrd Miniatures rate? Read the review below.

Roll-and-move is probably the board game mechanic everyone learns at an early age with the games such as Snakes & Ladders or Pachisi. While these games rely mainly on the roll of a die, the genre has advanced a lot since then. Yes, luck will always play a role, but there are many elements now included that make it more of a game and less of a crapshoot.

Variable player abilities, multiple possible paths, combining more dice, and so on. Racing games of today give you plenty of tactical choices and use dice only as an excitement factor, yet still remaining accessible for the whole family.

Bayou Bash is right down this alley. A Playful theme, with gremlins racing on the back of animals, dice-rolling with the movement everyone is familiar with, racing to the end (with some twists), all familiar stuff. So, is there anything you would select Bayou Bash over other family-friendly racing games, such as Camel Up, or Jamaica? Let’s take a closer look.

As already mentioned, Bayou Bash introduces you to a cartoony world, where gremlins meet to enjoy their annual animal-riding race. But it’s not just about finishing first. It’s about gaining the most fans in the process. Being fast is one way to do that, and ramming other players (and their fans) is an equally appealing way.

The theme is lighthearted, Wacky Wheels-like, with plenty of puns and references. It doesn’t take itself seriously and in that aspect, it represents the game’s family nature well.

The presentation is in-line with that. Bright and colorful, it sets the right atmosphere. Check out the images to see for yourself. The artwork from Alyssa Menold is fantastic and complements the whole thing.

The component quality is on par, as well. The track pieces are solid and fit together perfectly, there are wooden screen-printed meeples and adorable barrels. The cards and character cards are glossy and surprisingly pleasant to handle. The dice and cubes are plastic and fairly standard.

Bottom line, Bayou Bash is a wonderfully looking board game with outstanding production value. A joy to look at. 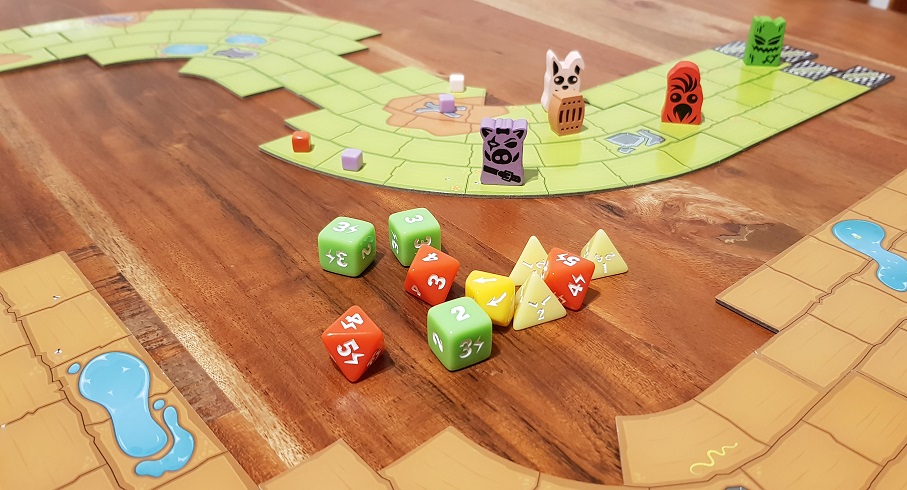 Although the rulebook is over 20 pages long, the game is really easy to learn and teach. There are only a few pages worth of rules, the rest of it is examples of gameplay, circuit samples, and variants. With many pictures.

Even though the main concepts are straightforward, the rules are a bit fiddly and unintuitive, particularly when it comes to “stagger” and falling off the track mechanic. Expect that in the first couple of games you’ll have to refer to the rules often.

Every player gets a cheat sheet at the back of his character card, which does help, but I hate having to flip it every time since there’s useful information about your special abilities on the front.

Unfortunately, the rules as a whole are not streamlined enough that I could say you’ll be able to have a smooth and flowing gameplay in a family environment from the get-go.

In such a group, you need the game to capture the players from game one, as many players won’t give it a second chance. 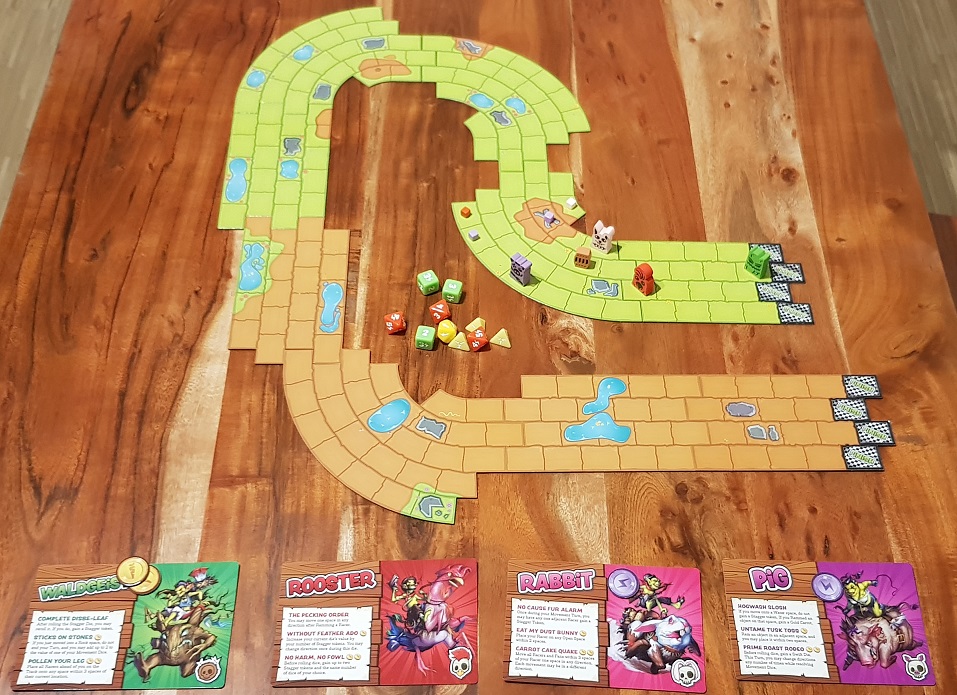 How to Play Bayou Bash?

The idea of Bayou Bash is simple. You’re in a race with other players and your goal is to gain the most fans and place them on the track.

You get fans in two main ways. After every turn, the player in the lead receives two fans, which he must place on the track somewhere in front of him.

The second way is to ram other players, you receive one fan that way. You can ram them directly or you can use a barrel to help you.

The movement is done with the help of several 4, 6, and 8 sided dice. Each turn, players will pick Jockey cards, which determine which dice each player gest to use. The player in the last position gets to choose first, which acts as a small catch-up mechanic.

When you roll your dice, you have to plan your route carefully. You can move straight or diagonally, but you must complete the whole movement of one die in one direction. You can change direction with the subsequent dice, and you must use all the dice.

The rams and falling off the track are resolved as they happen, and fan and stagger tokens are given out.

Any stagger tokens you accumulate are resolved at the end of your turn. You roll a stagger die to determine a direction and you move a number of spaces, according to how many tokens you have.

To spice things up, there’s an Event card drawn every turn. These temporary modify the rules, trying to add a bit of diversity. Every character also has three special abilities.

By far the most fun thing to do in Bayou Bash is planning your route after you roll the dice. There are several things to consider. Of course, you want to advance forward as far as possible. But also, you need to avoid rocks and water, and possibly ram other players and their fans out of the way.

Falling off the track is a constant threat, be it by your own dice, stagger die, or ramming. Ideally, you want to end your turn somewhere towards the middle of the track, to minimize this peril.

As you can imagine, there’s plenty of player interaction. There’s ramming, fans, barrels, and terrain, that all play a role in take-that moments. Certain character abilities are also directed to mess with other players.

Although falling off does hinder your progress a bit, it’s not detrimental and you’re on your way quickly. Still, players who don’t like take-that mechanics will be left frustrated.

Our group definitely felt that there was enough random with the dice rolls already and that concepts such as the stagger die or falling off the track could be removed completely and the game would work just fine.

Another redundant game mechanic is the event deck. I understand why it’s there – they wanted to add some more variety. But in practice, the events are … uneventful. Mostly arbitrary rule changes that do not affect the gameplay much, other than taking your attention away from it.

The jockey deck, on the other hand, is structured properly. You’ll have meaningful choices. Perhaps you want dice with lower numbers this turn, sou you can navigate around those rocks, or higher-numbered dice to make straight a run to the finish line. Or anything in between, together with barrels and carrots (to activate your special abilities).

Of, course luck will play a big role in whatever you pick, but I think the game strikes a nice balance between luck and the meaningness of your choice.

Character special abilities are very situational and that’s how you use them. Usually just a couple of times per game. Carrots are scarce, anyway.

As you can see from the pictures, the track pieces are modular, which means you can build whatever track you want. Long, short, more objects or fewer objects on it. If you have no imagination, there are plenty of suggestions in the rulebook.

Therefore the playing time can be manipulated as you want, although we leaned towards shorter, harder tracks, to maximize player interaction.

Since the game bets so much on the plate interaction, I suggest playing it with at least 3, if not 4 players. You want to have players around other players as much as possible, so you can mess with each other.

It’s obvious that Bayou Bash tries to cater to families and I can say firsthand that the kids will love it. The production values are excellent, but the cracks in gameplay will start to show soon. The rules could use a bit of streamlining and certain elements could be dropped without any harm.

In the end, I can’t fully recommend it, especially with the availability of games such as Downforce, Jamaica, Camel Up, Flamme Rouge, or even The Quest for El Dorado or Cubitos, if you want something slightly heavier.

>>>You can buy Bayou Bash on Noble Knight Games<<< 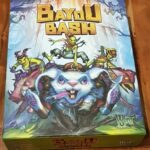