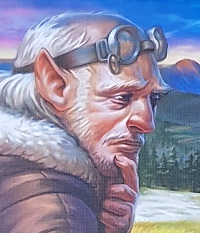 This article is a review of Cartographers, a 2019 draw-and-write board game. Find out what it’s about, who it is for, is it any good, and if you should buy it.

Introduction to Cartographers Board Game Review

Tile placement is one of the more satisfying board game mechanics. Seeing the landscape or other structures in front of you grow and take shape always makes you feel warm inside.

But what if you took this one step further and demanded that the players draw the tiles themselves? Introducing Cartographers, the 2019 title from the publisher Thunderworks Games, best known for Roll Player. In fact, Cartographers take place in the same universe (not that it matters).

Cartographers comes with very simple and intuitive rules. Basically, you draw a card and draw that shape into your map sheet. Anyone can learn it in a minute and play instantly. It’s a terrific family and gateway game, but also great for larger numbers.

New to board gaming? Read our FAQ.

Each player receives a sheet of paper, divided into 11×11 squares. You’ll fill this out with Tetris-shaped blocks that will be drawn out from a deck of cards over 4 rounds. Apart from the shape, each block also comes with a flavor (terrain type): villages, fields, water, forests, and monsters. Often, you’ll have o choice of two possible terrain types.

After every round, there will be a scoring, depending on that round’s scoring conditions. There’s a whole deck of scoring conditions, and since you need only 4 per game, that guarantees plenty of variability. There are four basic scoring categories, based on:

The conditions of goals vary: sometimes you’ll need to place forests on the edge, then you’ll need a large village, but it must not touch a mountain, or maybe your water will only score if it touches a mountain.

The goals are different enough to make every game feel slightly different (also, because their order may be different), but I suggest you read the text on them carefully since some are very similar and a line of text may be the difference between scoring and not scoring.

To add some complexity, there are the aforementioned mountains that are already printed on the sheets. They provide a coin bonus if you surround them on all four sides and are also featured in several goal cards. Some terrain cards also require you to place them over ruins, which complicates your job a bit more. Other cards will give you the option to place a larger tile or choose a smaller tile and get a coin bonus on top.

Coins are a permanent income of points, so getting a few of them early on means you’ll get those points in every subsequent scoring. 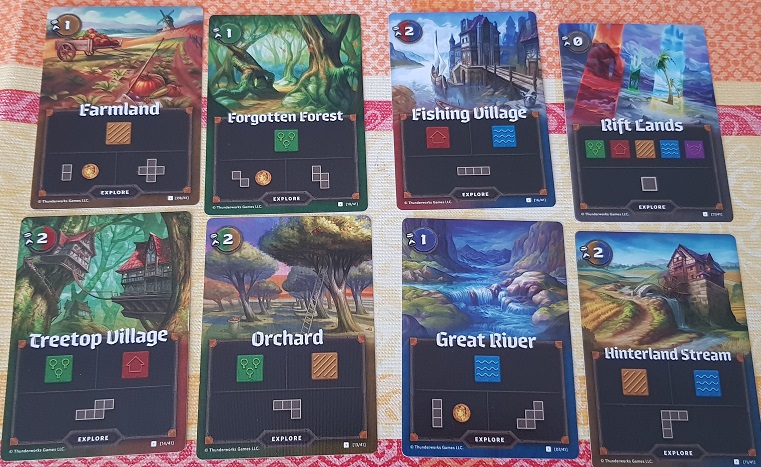 The final terrain type is monsters. When a monster card is drawn, you’ll pass your sheet to the player on your left (or right), and she will place that tile in for you. Since every adjacent square to monsters scores negative points, it’s in their best interest to make it as difficult for you as possible to box in those monsters afterward. Of course, you’ll do the same to them.

The map sheets are double-sided, with the backside having a bit of terrain as impassable, reducing your options and guaranteeing a tighter game.

After four scoring rounds (conveniently named after seasons), the scores are tallied up and the winner declared.

As I already mentioned, Cartographers are placed in the world of Roll Player, but the game itself is fairly abstract. Still, the artwork on the cards is colorful and helps bring the game to life.

The cards are of decent quality and there are 100 (double-side) map sheets included, which should be more than enough for an average player. Moreover, there are four pencils included in the box. If you run out of sheets, you can copy them, buy the game once again, or (the best choice) buy one of the expansions.

Cartographers work best as a warmup or a filler game. It’s light, with a short playing time. You can play it casually, but make no mistake – if you want to score big points, careful planning will be needed. And a bit of luck from the card draw. It can get quite competitive, with just the right dose of take-that (monster tiles) included to keep you awake and realize you’re not alone.

So far, I’ve played just under 10 games and it’s not getting old yet – but I suspect that after a couple of dozen plays and after you’ve seen a fair amount of objective permutations, it will be. But by then, the game will pay for itself anyway.

The symbols on the tiles are spot on. They are distinct enough, so you easily tell the difference between a tree and a monster, yet fast and easy to draw. Even if you’re, like me, not a big drawer, you’ll have no problems recognizing the images. You can use your own symbols or even colors for greater clarity – there are some true works of art created by the players on BGG.

Cartographers are played simultaneously – you draw a card and then all the players draw the shape at the same time. This means it’s infinitely scalable (the box says up to 100 players) without affecting the gameplay and playing time much.

There’s also a single-player mode against a high score, where the monsters are placed with a pair of very simple rules. Although the solo mode is satisfactory, I see the potential for a more structured, campaign-like mode, especially since this is sort of implied in the narrative on the box. 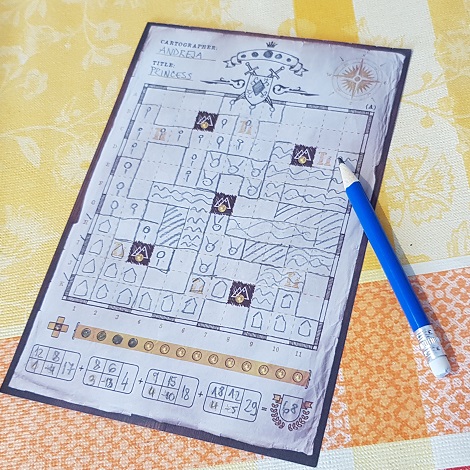 Although I haven’t yet tried them, there are a handful of expansions available. They mostly add new map sheets with different layouts. Since I can tell that the gameplay on the original two layouts is different, it’s fair to assume the same from expansions.

New cards in form of objective cards, monsters, and even player skills are also available. If you like the game, expansions seem to be just the right amount of everything to extend its longevity.

Cartographers is a very enjoyable snack. The setup is blisteringly fast and you don’t even need a table for it, just a bit of space for the objective cards. You can hold the map sheet in your hand. The box is tiny, as well. As such, it’s perfect for travel: cars, hotel rooms, even camping.

I reckon I’ll keep this one in my collection for an occasional play now and then. Maybe I’ll even add an expansion somewhere along the road.

>>>You can buy Cartographers on Amazon<<< 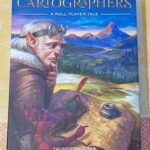