So far, I’ve played around thirty games of Scythe. I have been playing predominantly digital edition since it allows me to play more games and play whenever I want. I have developed some Scythe strategy tips of my own, but I am still struggling to beat the AI at medium strength.

I knew I wasn’t playing optimally. In the end, I always got fewer coins from tiles, structures, and coins themselves. I wasn’t focusing on the right things. Popularity and military strength are important, of course, but putting too much emphasis on them held me back in other areas.

I wasn’t using my mechs properly to carry workers around, so I wasn’t controlling enough areas and didn’t have the option to build on tiles that score points at the end.

Also, I wasn’t giving too much importance to the coin earning itself. As you can read in my original review, I was under the impression that you get most of the end-game points by other means and that your treasury is just a bonus on top. Experience showed me, that the winner gets as much as 40% (my rough estimate) of his end coinage from his treasury. Which is a lot.

Another pretty obvious thing was that you must always try to use both – top and bottom-row – actions. Since turns are (soft) capped (it ends roughly after 18-22 turns), there is only a limited amount of time to get the stars and you have to make every turn count. Of course, this is much easier said than done and is one of the key player skills in Scythe.

You have to plan your moves several turns in advance so that you always have resources for bottom-row action available. Ok, at the start you will have to make a couple of “dead” turns, but after that, you can’t afford them anymore. I still struggle with this aspect.

What I did was: I came into a game with absolutely no plan on what to do. I just went along as it seemed appropriate at the time: maybe produce, maybe enlist, maybe build, etc. Such experimenting and jumping from one thing to the other is not what you want to do.

My next move was to turn to our uncle Google for answers. Surely, there are guides online that give good tips. And there are – and in this article, I will present to you what I have learned in a compressed and (hopefully) easy-to-read way. 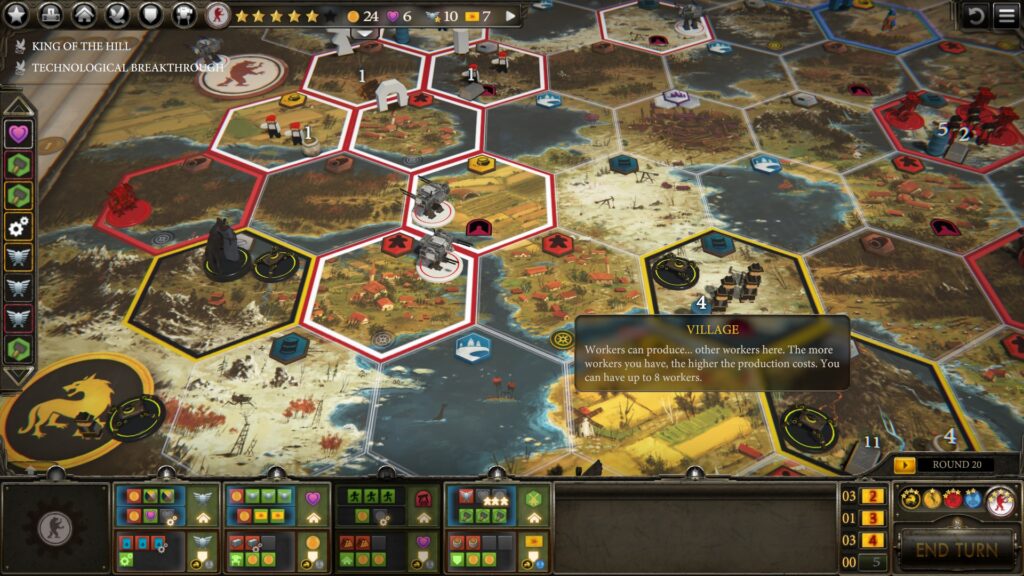 Know Your Strengths and Weaknesses

When I started, I did realize that each faction has its specialty, but I didn’t know enough to fully take benefit of their abilities. Well, I (and you) should. Since there are only five factions (in the base game), that shouldn’t be too hard.

Combine this with the fact, that every faction has a fixed starting location and you already know which resources are at hand and which are not. Now you only need your mat to start working on the foundations of your game plan.

At the beginning of the game, you should have a rough plan on how you will be getting your stars. Look at your bottom-row actions. You are probably going to need to get three of your stars from here. Make sure to focus your efforts. The last thing you want to do is to be one action away from several stars. 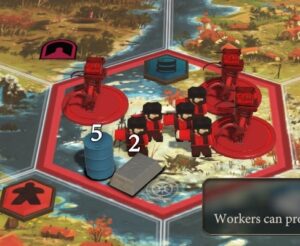 It’s better to build all four buildings (for example) and then go enlisting. It’s still okay to have an upgrade or two, even if you’re not going for a star in that category. Remember, any bottom-row action is better than no bottom-row action.

In the beginning, you’re going to have to take a couple of dead turns, but that’s ok if it sets you up for a strong mid-game production cycle. Use your move/produce/trade actions to achieve this. Most guides recommend five workers to be a good number to work with. Ideally, you would then move workers to your desired tiles with mechs, as this is much more efficient than moving workers one by one.

Now we’re ready to get to business. You should now be in a position to take the bottom row action every single turn (with a combination of trade/produce/x) and work towards those stars.

There are not many random factors in Scythe, but there are enough that there is no one overpowered strategy and that you have to approach every game differently. Player mats play a huge part in the overall starting strategy, as do your objective cards and (to a slightly lesser extent) which tiles get bonus points for buildings.

Encounters can significantly boost your momentum or steer you in a completely different direction (your first encounter is particularly strong since you don’t have many assets yet).

And there are those pesky opponents, trying to win the game just like yourself. It’s always wise to keep an eye out for what they are doing and modify your plan if needed.

If you look closely at their bottom-row action plan, you can enlist wisely and reap (free) benefits every turn they do it. And, since in the end, you will likely need that star (or two) from combat, it’s not stupid to look for chances to get them as cheaply as possible.

The Do’s and Don’ts

Attack when you can put together enough power to guarantee a win. Then it’s a bluffing game of how much of that you are going to need. If your opponent thinks, he can’t win, he may only put up a very weak resistance, so you can win with little power. Or he may anticipate that, and put more, to catch you off-guard. Or you may anticipate this and … you know the drill. It’s an intriguing cat-and-mouse dance.

Am I Any Better Now?

After doing the research and writing this article, I had to put things into practice. I took Polania out against two medium and two easy AIs, and I pretty much wiped the floor with them. Here’s the picture – take a look for yourself.

I was really thinking about my moves, my next moves, and the moves after that. I improved all aspects of my game: controlled plenty of tiles at the end, built next to lakes (that was the objective), and got a lot of stuff out of enlisting. I earned my stars from buildings, enlisting, mechs, power, and the last two from combat. I also made a mistake in combat where I was trying to be a bit too fancy and lost a fight needlessly, which prolonged the game for two turns.

My popularity is low (still in tier 2) since I’ve got two hits from chasing away enemy workers. Another aspect I forgot about, was my objective cards. These usually mean one fairly easily earned star, but I completely forgot about them in this game.

Without those setbacks, my win would be even greater, so I can say I certainly improved my game quite a bit. But still, there there’s always room for improvement.

I hope that with the help of this article, you learned from my mistakes, just like I did, and can become a better Scythe player.