This article is a Clans of Caledonia Review, a eurogame based around farming in 19th century Scotland. It’s not just good, it’s excellent. Read on to find out why.

The 19th century was a time of great change. The industrial revolution was in full swing changing how people lived, worked, and traded forever.

Scotland, a predominantly agricultural nation, felt the new wave coming from the south among the first. Food production increased, various products were available for import, and whiskey became a highly demanded export commodity.

You play as a leader of a historical clan. Can you cope with the new economic circumstances and compete with others in producing, trading, and exporting agricultural goods?

The first thing you notice straight out of the box is the amount of wooden and cardboard tokens. There are several boards, over 100 various tiles, and 70 coins.

The cardboard features art from the prominent Klemens Franz, known for illustrating titles such as Agricola or Caverna. The art style is spot-on and works with the theme excellently.

There is no text on any cardboard, just numbers, and icons, meaning Clans of Caledonia is a language-independent game.

English and German rules are included in the box. The rulebook is very well written. I did not have any problems learning the rules and referencing back, the information I looked for was exactly where I expected it to be. There is also a reference card for each player, outlining the course of the game and available actions.

Resources and units come in the form of wooden tokens. There are a total of 239 and they make the game come alive. Six resource types (milk, wool, cheese, grain, bread, and whisky), player-specific units (cows, sheep, bakeries, fields, distilleries, cheese dairies, and workers), and various tokens are meticulously carved and painted in clearly distinct colors.

The components are a big positive of the game, but the same couldn’t be said about the box. It doesn’t come with any insert (there are 3rd party solutions available on the market), just plastic bags.

With the number of components in it, this fact unnecessarily extends the setup time. Moreover, the box itself is barely big enough for everything, cramming components together, and making your life difficult.

A 3rd party insert, like the stuff guys over at Folded Space make is extremely useful.

The first thing to do is to build the map. It’s made of four double-sided modules, offering 16 different layouts. In each corner, a port bonus tile is placed. These act as one-time special abilities.

The map has several different features: lakes, rivers, grasslands, woods, and mountains, each playing a role later on.

Next, the market board, showing the prices of six goods, is set up. The export board is filled with available export contracts and scoring tiles.

Probably the most tedious task is filling your player board with the 32 buildings, which will you then take down and place on the map. Next to them are your merchants and your shipping reach token.

The most important thing during the setup phase is choosing a clan. There are 9 historically accurate clans available, each with its own area of strength. Clan MacKenzie has the cellar and can age whisky, selling it for more, Clan Stewart can trade cheaper, Clan Cunningham has the ability to sell milk directly, and so on.

The number of players +1 clans are drawn and players then get to pick. They all demand a slightly different approach. The starting resources are also randomly drawn, further ensuring Clans of Caledonia is not a one-trick pony.

The last thing to do is to place the initial two workers on the map. Workers are your money-making type of unit. You can place them in forests or mountains. You have to pay the price of placing them (as seen on your board), plus the price of the terrain (as seen on the map).

Phases of the Game

Clans of Caledonia is played for Glory (points). You obtain that by fulfilling as many export contracts, while also seizing other scoring opportunities on the way. You take actions that will enhance your engine – allowing you to earn more money, produce more goods, expand, and export.

While Clans of Caledonia has many moving parts, the core principle is fairly straightforward. There are five rounds, each played over four phases:

In the action phase, there are 8 different actions you can take. Players take actions one by one until everyone has passed:

On top of these, there is also a one-time free action in form of a port. If your ships can reach any one of the four ports in the corner of the map, you can use the bonus ability.

These vary from discounts on export contracts, gaining resources, upgrades, gaining money, or manipulating market prices. They can make a difference if used at the right time.

When all the rounds are completed, final end-game scoring takes place.

Scoresheets are provided so you can easily summarize the score and the player with the most points is the winner.

Clans of Caledonia features very straightforward and streamlined play, despite many options and opportunities. It’s one of those easy-to-learn-hard-to-master games. Mastering it is quite a task – with so many things to look after there’s a chance of analysis paralysis.

Luckily, the smooth, almost simultaneous turn-taking takes care of this. You only do one thing on your turn, so the game is moving along all the time and you’ve got time for analysis during the downtime.

The clans are another standout. They are historically accurate, with an educational note (i.e. “Cuinneag” is Gaelic for milk pail and “ham” means village in old English – therefore Clan Cunningham can produce butter from milk and sell that directly).

The differences between them are not just superficial – for a good result, you have to adapt your playstyle to their abilities. And they don’t play the same every game as you will get different starting resources and different contracts will be available.

Indeed, the replay value in Clans of Caledonia is very high. Not only clans, but many more variables also change game-to-game: the map, export contracts, scoring tiles, and bonus port tiles. 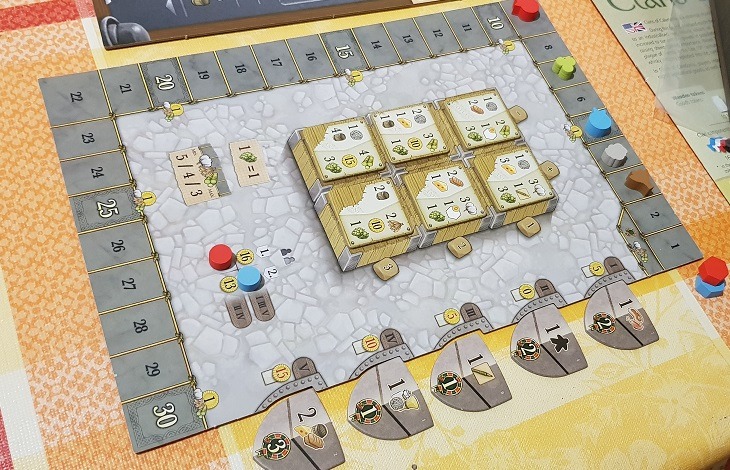 As export contracts are your bread and butter, choosing them is crucial. There are more lucrative and less lucrative, harder and easier to accomplish. You want to choose in accordance with your production. Money is scarce and you can’t build everything. Normally, you would focus on one or two areas.

You also have to be mindful of how much Cotton, Tobacco, and Sugar the contract brings and how will this affect the rarity/abundance of these premium import goods, as they are your main means of scoring.

The market works in cohesion with the production and export board. Wise manipulation of market prices can mean an easy fulfillment of an export contract – it may be more profitable to just buy something instead of producing it yourself. If the prices are high, you could instead benefit more from selling. 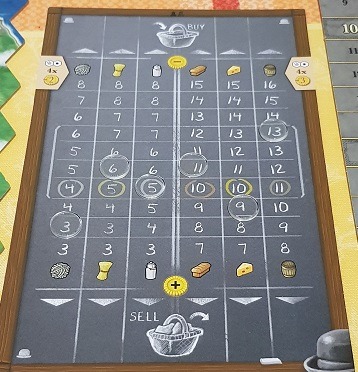 One thing I did not mention in the rules, is the neighboring bonus. It means that every time you put a unit on the map adjacent to your opponent, you then have a one-time opportunity to buy a resource of his type at a discount. It may not seem like much, but it’s another small cog in a mechanism that will separate good players from beginners.

End-of-round scoring tiles are a different matter. They are drawn randomly. Sometimes they will be aligned with your overall game plan, other times you have to decide on what to focus on. Keep your resource at producing and exporting or keep some of the processed goods for scoring?

The map is another thing you have to worry about. The features restrict building and not all hexes are worth the same. Normally you want to build on the cheaper hexes … but sometimes a scoring for expensive tiles is drawn.

The lochs and rivers are also important. The shipping reach is not to be neglected, as you want to spread out as much as possible: to reach cheaper tiles, to reach other players for neighboring bonuses, to reach port bonus tiles, and to have as many separate settlements for the end scoring. 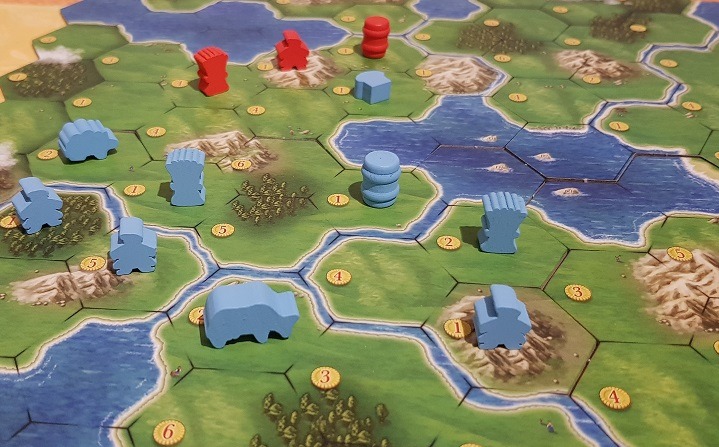 While the single-player game is an exercise in optimization, the 3 and 4-player games become a race for living space.

There are a lot of things to consider in Clans of Caledonia. Money comes hard and you have to spend every pound wisely. Your decisions are important and have far-reaching consequences. This is a dream for hardcore players that like to optimize things.

On the other hand, Clans of Caledonia is very friendly to beginners. You only do one thing in a turn, and with the help of a reference chart, this makes it very easy to understand how the game works.

Clans of Caledonia is almost like a hidden gem. Not many people are talking about it, but those who have tried it will recognize it as one of the best eurogames ever. Yes, it is that good. 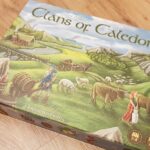