This article is a list of Tapestry Board Game Civilizations, together with short strategic advice on how to play them.

Introduction to Tapestry Board Game Civilizations

Factions in Tapestry are an interesting breed. In a civilization game, you’d normally expect nations or ancient civilizations to be featured, but in Tapestry, the developer has taken a different path. Civilizations are separated by their belief and politics, which also directly describe their abilities and style of play.

The developer has done some post-release re-balancing, which I included in my thought process. The latest is from November 2021. You can find it here.

If you are unfamiliar with Tapestry, you can read my full Tapestry review here. 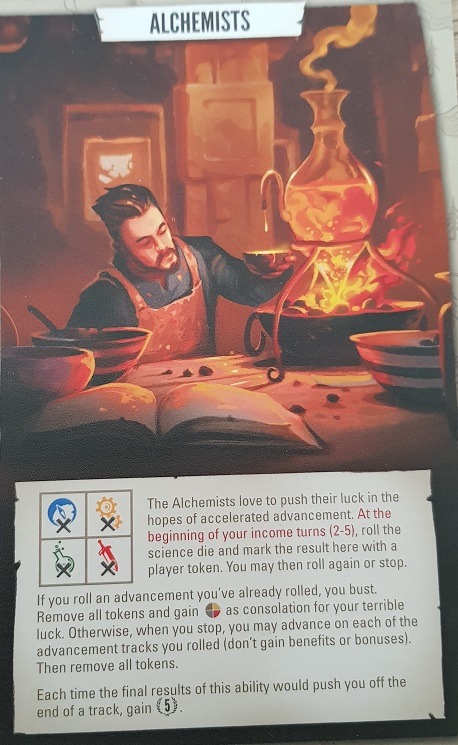 The Alchemists love to push their luck in the hopes of accelerated advancement.

At every income turn, you play a little game: you roll the science die to progress on a track. You can roll up to four times to potentially advance on all four, but if you roll the same track twice, you bust and only get one resource as a consolation.

Since the progression is without bonuses and benefits, I don’t find this faction particularly useful. They’ve already been adjusted to start the game with two extra resources and 10VP, so it seems they are also statistically weaker. 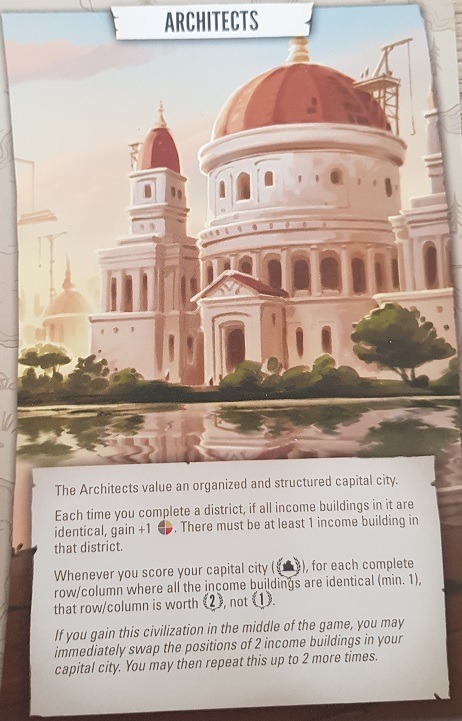 The Architects value an organized and structured capital city.

For every district, you get an extra resource. Every completed column and row is worth 2 victory points, not one.

The above benefits are potentially big, but there is a trick: all the income buildings in that district, row, or column must be the same (you can combine them with landmarks). This is easier said than done, but with careful planning, you can still reap nice rewards. But not a lot of direct benefits – not a beginner-friendly civ.

Adjustment: in a game with 3 or more players, gain 10 VP per opponent. 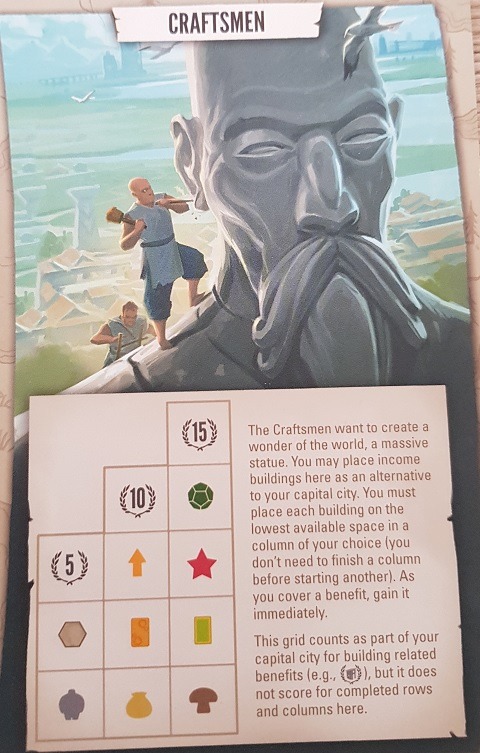 The Craftsmen want to create a wonder of the world, a massive statue.

Their mat has a grid on which you can place income buildings (not landmarks!) just like on your capital mat, reaping immediate rewards.

Craftsmen seem to be statistically successful and therefore start with one less resource by the latest adjustments. 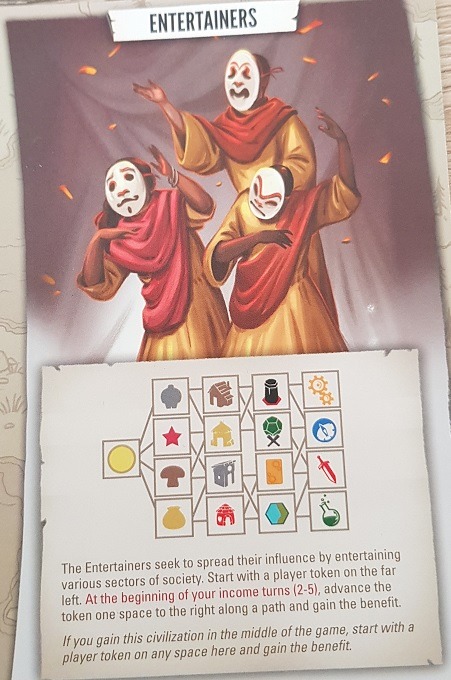 The Entertainers seek to spread their influence by entertaining various sectors of society.

At every income turn, you get an extra resource, building, action, or track advancement. You choose the benefit by following a simple map with different paths.

It seems their fixed benefits make them a constant and balanced performer, but do start with an extra resource, as per the latest adjustment. 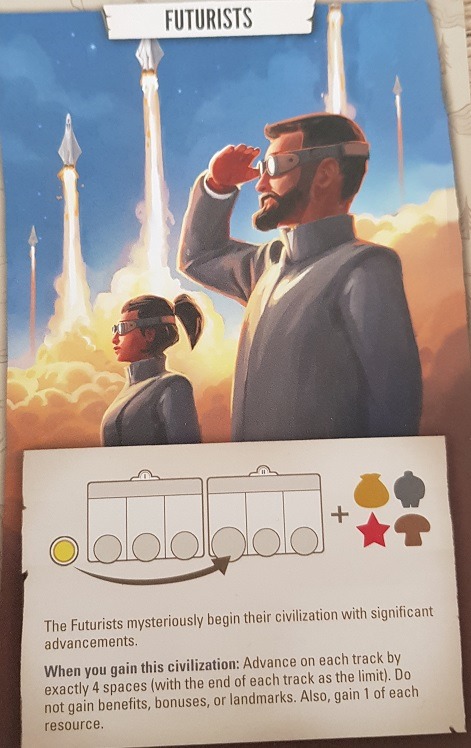 The Futurists mysteriously begin their civilization with significant advancements.

This is a very weird faction. You start on the fourth step on each track, but you don’t gain any bonuses, benefits, or landmarks. This means you are closer to the end of the track, but you miss out on some of the cheaper rewards.

I don’t like this approach but looks like it’s successful, since they lose 1 culture and 1 other resource by the latest adjustments. 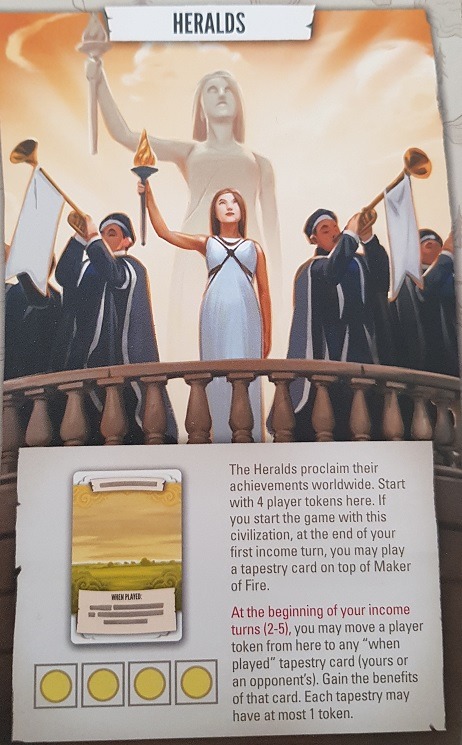 The Heralds proclaim their achievements worldwide.

If you like tapestry cards, this one is for you. You can place your first on the “Maker of fire” slot and at each income turn, you have the ability to re-use one of the “when played” tapestry cards. It can be yours or your opponents’. 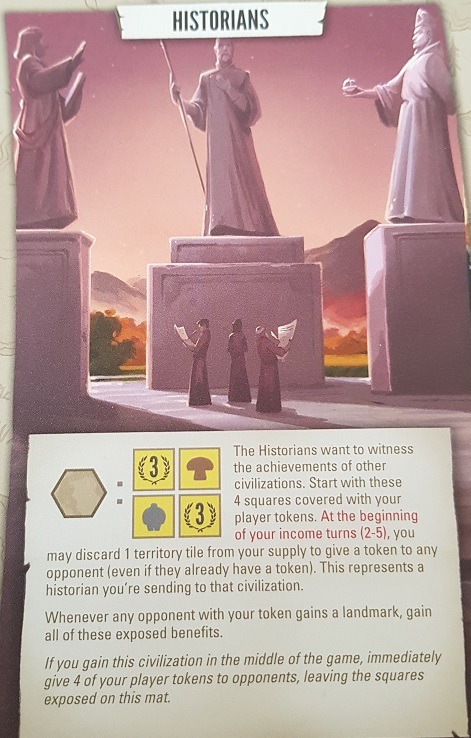 Historians want to witness the achievements of other civilizations.

At every income turn, you can send a historian to another civilization. You have to discard a terrain tile for that (that’s not a big hit honestly). Then, every time that opponent gets a landmark, you get all exposed benefits.

This civilization is obviously stronger, the more players are playing. If you play with the Arts track (fro, the expansion), you lose 5VP per opponent at the game start. 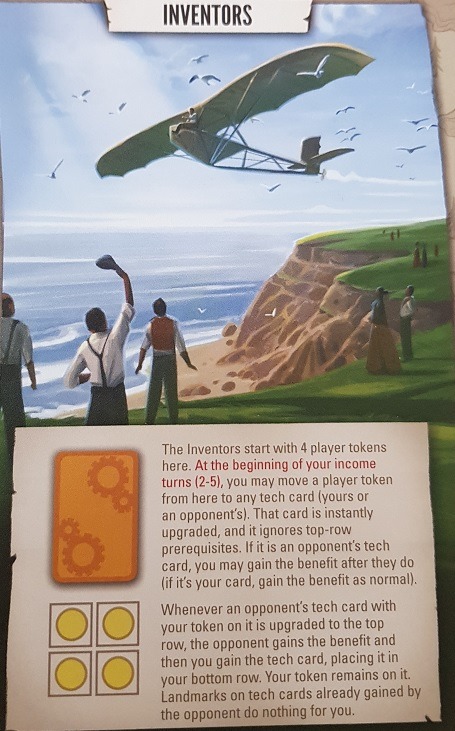 The Inventors want to achieve glory through technological advancement.

Focused on tech cards, Inventors get what is basically another upgrade at every income turn. They can even upgrade opponents’ tech cards, reaping benefits from them.

A well-balanced ability, slightly affected by a number of tech cards in play. Usually not a problem, since tech cards are solidly balanced.

If you’re more of a science guy, check out the list of best educational board games. 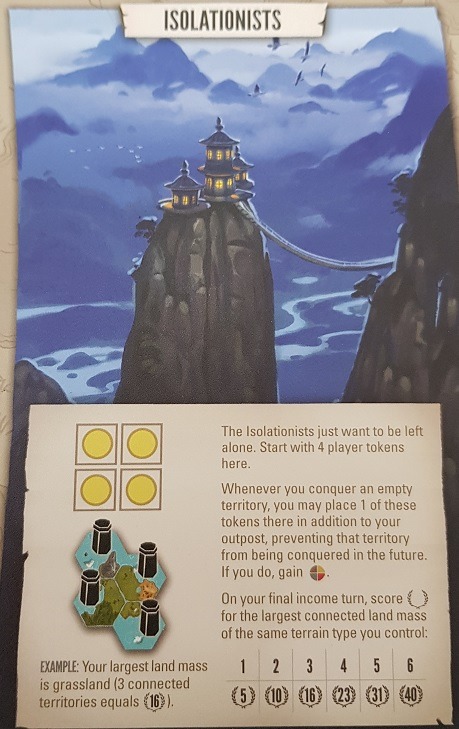 The Isolationists just want to be left alone.

If you don’t want others to attack you, this will be your favorite side. They can place four extra defense tokens, making four tiles immune to conquer, gaining a resource in the process.

They reap their main reward at the end of the game: they gain victory points for the largest connected landmass of the same terrain. With some planning, level 4 or 5 is not hard to achieve and it gives a lot of extra points. 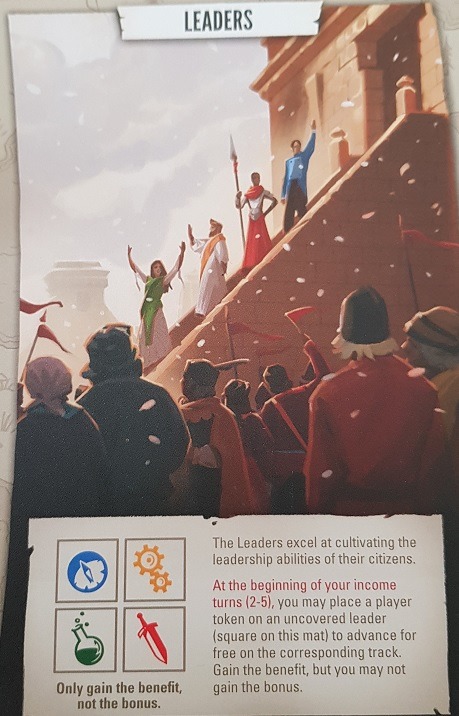 The Leaders excel at cultivating the leadership abilities of their citizens.

You get a free track advancement on every income turn, but only one per track. You get the benefit, but not the bonus. Plan accordingly, so you choose tracks where there isn’t a bonus option at that time.

Leaders are another one of those beginner-friendly factions that give instant rewards. 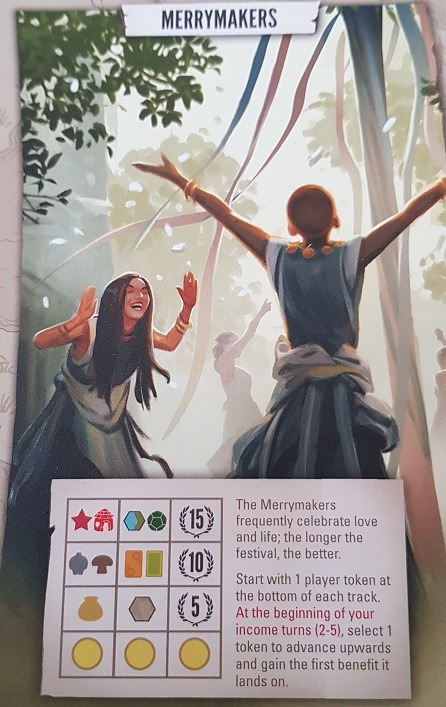 The Merrymakers frequently celebrate love and life; the longer the festival, the better.

Speaking of easy-to-play civs, here’s another. At every income turn, you advance one of your tokens on a simple track on their mat, gaining rewards.

Looks like the rewards have been slightly underwhelming since Merrymakers have been adjusted to start the game with one extra resource. 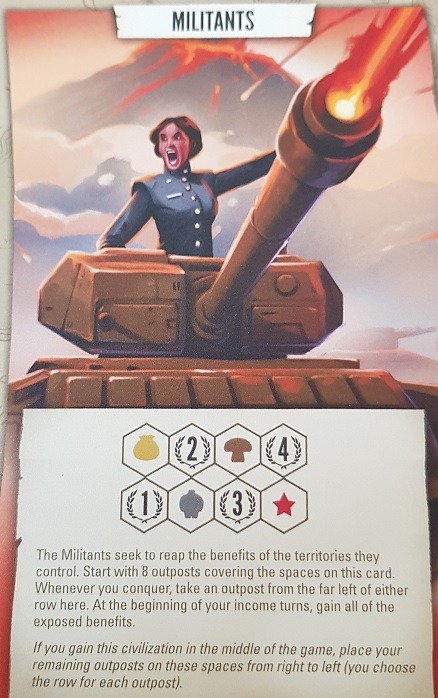 The Militants seek to reap the benefits of the territories they control.

If you want to get the best out of this faction, you’ll have to go conquer mode. Only by conquering will you uncover a space on their mat. At every income turn, you then get all the uncovered rewards.

Militants are perhaps the civ that is most track-dependent. To get anything out of them, you’re pretty much condemned to advance on the military track. 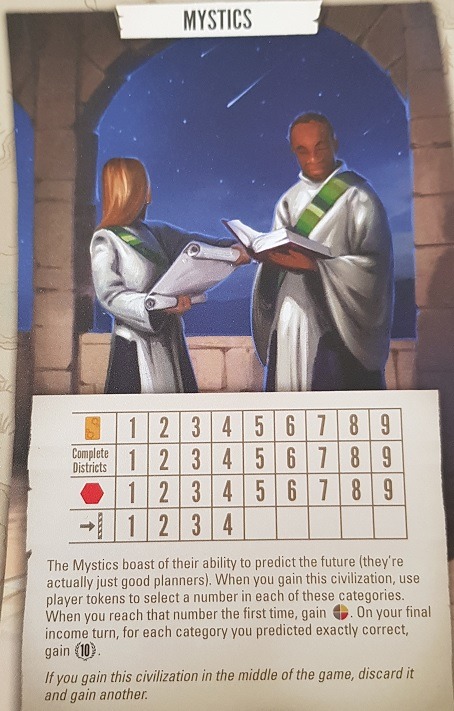 The Mystics boast of their ability to predict the future.

We’re getting into weird territory now. At the start of the game, you have to predict how many tech cards you will have, districts you will complete, territories you will control, and tracks you will finish.

When you reach that number later, you get a resource and if you guessed correctly, you get 10 VP at the game end for each right prediction.

There are two ways to play the Mystics. You can set the bar low and only reap the resources, or you can try to predict the end result, but risk missing out on everything. Not my favorite civ.

The latest adjustment grants them an extra resource at the start 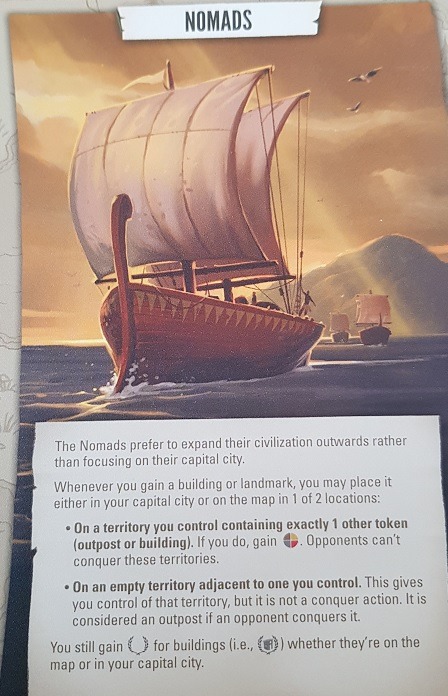 The Nomads prefer to expand their civilization outwards rather than focusing on their capital city.

We’re still in the weird-civ territory, Nomads can place landmarks on the map directly, gaining an extra resource in the process if you already controlled that territory; or gain control over an empty territory.

The first option is comparable to finishing a district, obviously slightly easier. But you lose on the column/row bonus. The second option is also interesting, should you go down the path of scoring points through the focus on the number of territories. 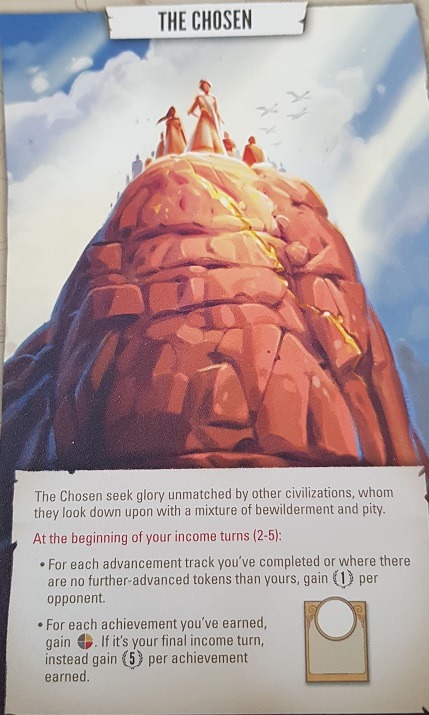 The Chosen seek glory unmatched by other civilizations, whom they look down upon with a mixture of bewilderment and pity.

If you always want to be first, play The Chosen. At every income turn, they get an extra point per opponent for every track they are first and a resource for every achievement.

The first bonus is very situational and dependent on player count, while the latter is quite rare. No wonder The Chosen have been adjusted to gain 15 VP per opponent at the start of the game. 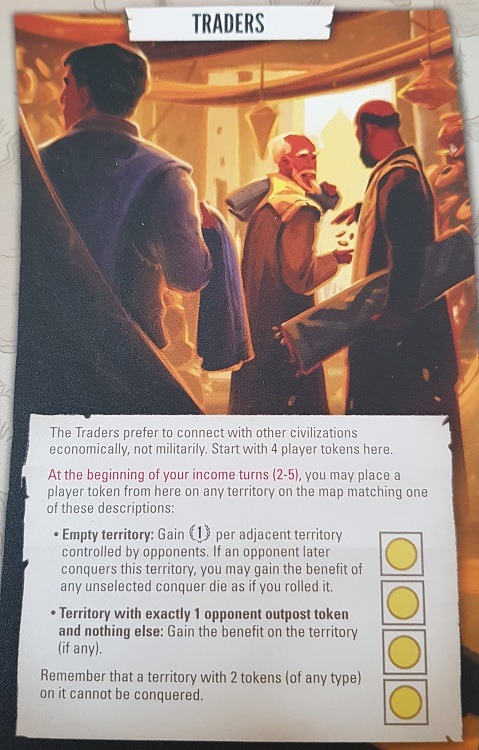 The Traders prefer to connect with other civilizations economically, not militarily.

The trick is to combine both bonuses. Examine the board and determine where the enemy will expand to. Place a token there, gain VP, and later (when they conquer) also gain the benefit on the tile. Traders are more powerful on a crowded map (3 or 5 player game).

Apparently still not strong enough (or the players don’t know how to play them), they get two more resources and 10VP at the start.

That’s all sixteen of them. Some stronger, some weaker, others more direct or more of a gamble. For a high score, you must play by your civilization’s strengths and make sure you cash in all of its rewards.

4 thoughts on “Tapestry Board Game Civilizations”