Uwe Rosenberg is one of the greatest board game designers in history. In 2014, he surprised us with an abstract tile-placement game, Patchwork. Read this Patchwork Game Review to learn why I believe everyone should play Patchwork.

Great abstract games follow similar principles. First, they are very easy to learn. Second, they offer great strategic depth and are very hard to master. And third, the theme is an afterthought, often something that has no relation to game mechanics.

I’m happy to say that Patchwork, a 2014 board game from the renowned designer Uwe Rosenberg, ticks all three boxes. Let’s take a look at its theme first.

In Patchwork, you’re trying to patch a piece of cloth, a quilt. You do that by placing polyomino-shaped tiles onto your 9×9 board. There are very tight game mechanics behind this, so you can’t just take any tile you want. But more on that later.

Although the theme is detached from the mechanics, this does not mean it’s not good or that the artwork is bad. Contrary, the game looks stunning. The pieces fit together nicely and compile a colorful board.

How to Play Patchwork?

As said, the rules are simple, so this section will be very brief. Heck, the rules are merely 6 small pages long and 1 page out of those is the introduction.

Each player receives his 9×9 board. The central time board is placed in the middle (with 5 special 1×1 tiles on it), while the 33 regular patches are placed around this in a circular shape. A neutral marker is placed next to the smallest (1×2) patch.

Each player also receives 5 buttons, the currency in Patchwork. The game can now begin. On your turn, you have two options:

The polyominos are all shapes and sizes. More expensive also have buttons pictured on them, meaning they will give income later on.

The time track is a soft-cap on how many actions you can take per game. The player that is behind on the track is the one that acts next. That means turns are not necessary alternating back and forth, one player can take several.

More expensive patches will make you progress on the track faster, but give more buttons in return. On the other side, you can cover a lot of space with cheap patches for the same price.

There are two more very important things on the time track:

The game ends when both players reach the end of the time track. The scores are then summarized:

While the first glance might suggest Patchwork is a causal tile-placing game, below the surface, Uwe has created a very tight system that rewards optimizing economy and space. The quill-creation still works wonders attracting new players, especially women. They love the presentation.

There is nothing wrong with playing casually, but to be competitive, there are many intricacies you must think about if you want to play the game. I’ll give some examples.

Game of many Dilemmas

Managing your buttons is crucial. You want to place some button patches right from the beginning since they will bring you income for the rest of the game. On the other hand, such patches cost a lot of buttons themselves, not to mention they often advance you many spaces on the time track.

Cheap patches are great for filling out the board, but they bring no income. As you need buttons to place them in the first place, you’ll have a hard time winning if you don’t have any income.

There ever only 3 patches available to you, but this doesn’t mean you should ignore what lies ahead. The tile you take directly results in which tiles will be available to your opponent. Looking further down the line, you can estimate how the game will pan out if you take a certain patch. Often it’s best to just pass your turn.

Income markers and 1×1 tiles ensure that the time track is not a straightforward advancement. You have to combine this with all the facts above. Will taking this tile put you just over the income marker? That’s good, but it will also expose the 1×1 tile to your opponent. So that’s not that good.

But what if I take a cheaper tile? That may make it harder for my opponent to get the 1×1 since I’ll be further away. Hmm, but he’ll then have this great patch available, that fits just perfectly onto his board. Maybe I’ll just pass, collect a few buttons, pass him on the time track, and let him make the decision. But that can result in my board having too many unfilled spaces at the end.

As you can imagine, Patchwork presents a lot of challenges and co-dependencies between different moving parts. It’s like chess – it takes a computer to truly master it.

Besides the “stock” Patchwork, there are several re-skinned editions, such as Americana Edition, Christmas Edition, Winter Edition, and others. These play exactly like the original, the only difference is the artwork.

Patchwork Express is a lighter version of Patchwork. The playing area is now 7×7 and the pieces are larger and less complex, resulting in more straightforward gameplay and faster game time – no need to think too hard and long.

Patchwork Doodle is a roll-and-write spin-off. Polyominos are now portrayed on cards and players fill their quilts out by drawing them. Instead of the usual 2, Doodle can be played with up to 8 players, or even solo.

Playing against a computer is possible, as well. There are iOS, Android, and Steam editions. I’ve tried the latter, but they’re pretty much the same thing. They’re all fairly cheap and worth playing. Some observations:

Bottom line, I recommend the digital edition of Patchwork very much. I’ve had a lot of fun with it and I believe it’s one of the better board games for the digital port. The technical work itself is top-notch as well.

Patchwork is a game for everyone. Some will play it for its looks, some to sew a quilt, and some to optimize their strategies. Although it won’t keep you busy for years, there’s enough depth to pose a challenge for everyone.

If you’re an Uwe fan, Patchwork is not the one to miss. He’s a great designer that likes to keep a very short leash on players (very tight mechanics) and Patchwork offers something fresh, compared to his heavier titles.

You’ll also like it if thinking, abstract games are your thing. It’s also excellent for couples, especially if you two are roughly similar in skill. There’s no luck involved in Patchwork, so it might not be too fun to lose all the time. 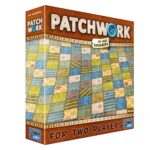