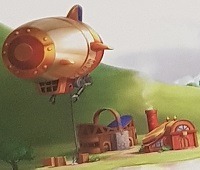 Legacy games are a popular form of board gaming. They string together individual plays with stories, decisions, and consequences into a larger campaign. Even though we would normally associate them with thematic games, euro games are no strangers to the legacy concept. In this Charterstone Board Game Review, you can learn whether the 2017 Stonemaier attempt succeeds at legacy gaming.

Introduction to Charterstone Board Game Review

Unless you have been living under the rock, you’ve probably heard of Jamey Stegmaier and Stonemaier Games. They don’t try to invent hot water. Rather, their games take successful game mechanics from others and blend them into an innovative new mixture. Sometimes more (Scythe) or slightly less (Tapestry) successfully, but always with a top-notch presentation. Their art and components are a joy to look at and handle.

Charterstone was originally released in 2017, but it has received a reprint in 2020. I’ve got my copy from the latter batch. I’m currently halfway into the 2 players + 2 automas campaign and I believe I’ve experienced enough to give an objective opinion.

Note that this review is spoiler-free. This means I will only describe the game mechanics and features in general, without getting into details. Images are also carefully selected to not give anything away.

The game contains much more than you can read or see here and if you’re really interested in it, I suggest not looking any deeper than this review. The experience is much better without knowing what to expect. 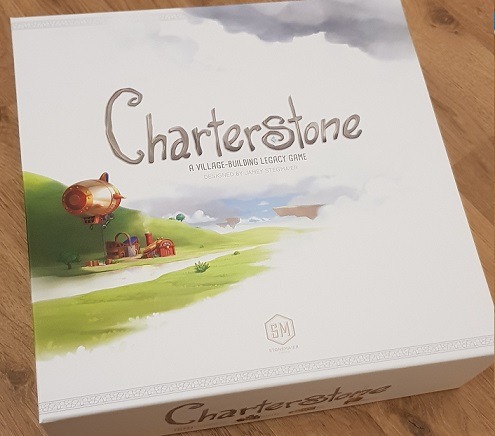 The Kingdom of Greengully is colonizing the vast lands beyond its borders. You have been selected by the Forever King as one of the six citizens, tasked to build a new village, with a focus on your sixth of the village: your charter.

Charterstone is a worker-placement game. You will place workers on various buildings in your charter and charters of other players, reaping several benefits in the process: resources, cards, money, and victory points. But these are not the only measure of success – you must also be wary of the story-based guidelines or missions, which are different for every one of the 12 games of the campaign.

As already mentioned, presentation is a really strong point with Stonemaier games and it’s true for Charterstone as well. All the tokens (resources and meeples) are wooden and carved out with great detail. Stickers and cards are of similar high quality. Board is double-sided, meaning you can replay the campaign on the other side if you buy the Recharge pack.

But the component that really stands out is the metal coins. They are properly heavy and a joy to play with.

Board art would be best described as “green”. The village is located in a picturesque rural landscape. The buildings and art on the cards have a slightly cartoonish tone. Everything looks cute.

The box(es), on the other hand, comes in clinical white, which makes for a very nice contrast.

Art is a very subjective thing, but I like Charterstone’s style and overall presentation very much.

The base principle is as simple as they get: you place a worker on a building, pay the costs (if any) and receive the benefits. If there is a worker already there, you bump it off, even if it’s yours. If you don’t have any workers, you must spend the entire turn retrieving them. So it’s a good thing if now and then someone bumps one of your guys back home.

You will start with basic buildings that give you basic resources (wheat, wood, iron, clay, coal, and pumpkins) and a few common buildings, that allow you to progress: build new buildings, open crates that unlock new stuff, sell resources for money or victory points, claim objectives, buy advancement cards and so on.

You can build buildings only in your charter and the spaces are limited, although not so limited you should refrain from building. But since the building will potentially stay there for the whole campaign, you need to think a bit before you stick it on. It’s worth checking what resources are in abundance for you and building a chain of buildings to exploit them (turn the resources into victory points as effectively as possible).

After the building is built, the card will stay in your hand and you will have the option to open the crate on it. That means you will pull specific cards out of a hefty Index box (over 300 hundred cards) and unlock all sorts of new stuff: buildings, rules, resources, and even game components. I won’t go deeper into details, because opening the crates is a very exciting part of the game, best experienced if you know nothing in advance.

There are several ways to score victory points: buildings, crates, scoring objectives, donating to the King, and earning reputation are the ones available from the start – you will unlock others eventually. Most major scoring opportunities move the progress token a spot closer to the end. The progress token is a timer for the game – when it reaches the end, it’s over and the points are summed up.

Several major actions require you to spend an influence token. These act as a cap on how many things you can do during a game. You start with 12 and if you run out of them, the progress token advances every turn, ending the game very quickly.

Every scenario of the campaign comes with a story Guideline, which sets the main goal of the scenario and also further develops the story. The game keeps track of your scores and some resources and components can be transferred from one game to the next.

How does it feel to play?

During your turn, you will have a lot of options. You can move your workers almost anywhere, therefore you need a plan. What are the guidelines and objectives for this game? Are there any useful cards in the Advancement cards section? What resources are available? How many influence tokens will that require? Then you decide on a course of action that will generate victory points and when you’re done, you make a new plan.

The gameplay is usually fast, but there are some turns when it slows down a bit if players overthink their plans. Opening the crates is the biggest slowdown, especially in the early games, when you’re still learning. 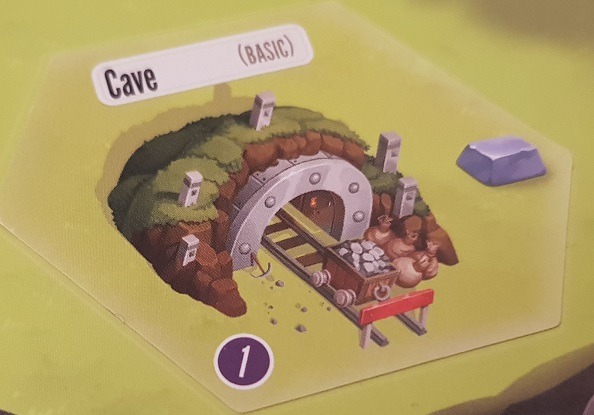 Speaking of learning, it’s a pretty steep curve. While the basics are simple, there are new rules and concepts being introduced, flooding you before you can really comprehend them. Things get better after game 3 or 4 and the board really starts opening up with opportunities.

There’s not a lot of interaction between players, especially in a shorthanded game. You’re focused on doing your thing and other players are focused on doing theirs. There is a bit of competition for some goals and you must take other workers into account when planning since you don’t really want to bump them off (it gives an advantage to your opponents). 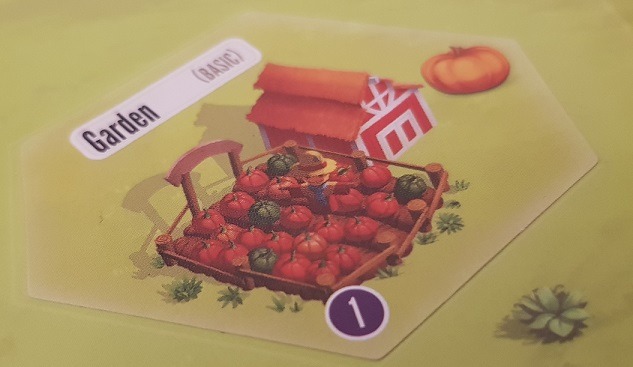 The games are a race for points and there’s not much you can do to impede other players. It’s a very friendly game and I can’t shake the feeling it would work very well if it had a cooperative mode. That would encourage more PvP interaction.

The campaign is best experienced with a constant cast of six players, each controlling his own charter. But if you don’t have that many, you can play with fewer as well. There are rules that develop inactive charters and a very capable automa system, that can replace a human player with no problem. It’s also possible to add or drop players mid-campaign.

Automa uses similar, but not exactly the same rules as the human players, which means it’s another set of rules you have to learn and keep in the back of your head. It took me a game or two to get accustomed to it. It helps if there’s more than one alpha gamer (the rules guy) in your group, just to keep the gameplay smooth.

I played a two-player + two automas game and being the only one that actually read the rules, I had my head full for the first couple of games, despite being a relatively simple game at its core. But as said, things get better after game four.

The story is okay-ish. It does a good job of stringing games into a sensible campaign. There are twists, complications, and choices, but nothing dramatic. But for a eurogame, it’s satisfactory.

Since I’m about halfway through, I’ll leave a possibility that it picks up the pace. So far, I haven’t really fallen in love with the Forever King or the Kingdom of Greengully yet, but he has done enough that I’m excited to sit down for the next game and see what happens.

A couple of months ago, a digital edition of Charterstone was released on Steam. This is really more of a mention than a review. I haven’t tested the game myself and I won’t until I’m done with the campaign on the tabletop edition.

But the game was very well-received and it has mostly positive reviews on Steam. If digital editions are your cup of tea, it’s definitely worth checking out.

Charterstone is a very good medium-weight worker placement game. The gameplay is usually smooth and engaging and there is a lot of excitement opening those crates. Almost like Christmas.

The campaign does a good job of holding everything together and you can feel the story progressing.

For the best experience, you want to play the entire campaign with the same players – preferably as close to 6 players. I’d suggest Charterstone to both gaming groups and families. It offers enough complexity to keep advanced players busy, but it’s still simple enough to cater to casual players.

Overall, a thumbs up from me. Now, time to go back and finish that campaign. The Forever King is counting on me …

IF YOU LIKE LEGACY GAMES: Read about 10 Best Legacy Board Games 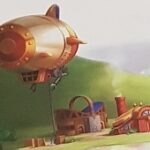