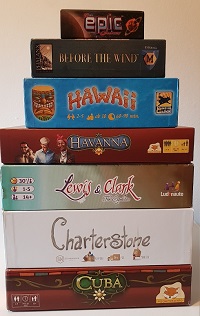 In this article, you will learn about the process of researching and judging board games. How do you know if a board game will be for you? How to recognize a good board game?

How to recognize a good board game?

In the process of how to recognize a good board game, I will follow 5 steps: visuals, pedigree (designer), online research (BGG), written reviews, video reviews, and playthroughs. These will allow me to determine whether the board game in question is any good.

A definition of a good board game

In one of our previous articles, we discussed factors, that make a board game fun (good), so those are also the factors we must recognize. Let’s recap:

Let’s say you see an unknown board game on the shelf of your local store. Other than the looks, it’s very hard to judge it. So, how to recognize a good board game? These are the 5 steps I take, in this order:

As superficial as it sounds, the first impression is very important. Look at the box cover and the back of the box: title, designer, publisher, awards, artwork, pictures of components, basics of theme, main concepts of gameplay. These should at the very least get you interested in what the game is and how it will play.

There’s another saying that I like: don’t judge a book by its cover. The same goes for board games. While the facade might look great, it doesn’t say much about the gameplay. The contrary is true as well: don’t write off a game just because the first time you saw it you weren’t impressed.

If you’ve played a board game before, you’ll probably be familiar with some of the leading names in the board game industry.

From the top of my head: Reiner Knizia, Bruno Cathala, Reiner Stockhausen, Isaac Childres, Jamey Stegmaier, Eric Lang, Uwe Rosenberg, Cole Wehrle, Elizabeth Hargreave, Stefan Feld, Alexander Pfister, Corey Konieczka, and Martin Wallace to name a random few. (And an apology to those who are not on this list and feel they should be – and also to those whose names I misspelled.)

Well-established and experienced designers are a good indicator that the people who made the game knew what they were doing. The likelihood of producing a good game will thus be higher. Every designer also has his/her own style of game designing and if you like a previous game, you’re more likely to find this one appealing as well.

Publishers sometimes go hand-in-hand with the designers, but not always. There are publishers who employ various designers, but their games still have similarities: an emphasis on miniatures, component production similarities, rulebooks, or overall similar design. Normally, that doesn’t mean much. The publisher is not a guarantee for a good board game, while the designer might be.

Other than the main artist (which doesn’t tell you anything about how good the gameplay is), that’s pretty much everything you can learn from the outside. For more, you’ve got to dig deeper – it’s time to go online.

The first place I always check online is the BoardGameGeek database. They have virtually every board game in existence in their catalog. Information about board games is mainly compiled from members voting.

This means you’ve got to take them with a pinch of salt, especially with games that have a low number of voters and games that draw a specific crowd (which will rate them subjectively too high). But overall, I found BGG very informative. You can find information on:

There’s also all sorts of general game information (description, publishers, expansion, re-implementations, mechanics), as well as links to official sites, reviews, forum posts, and useful downloads for the board game in question.

To get an objective opinion from credible people, people that have a lot of board game experience behind them, the next step is written reviews. There are two ways of doing that:

I’ll normally skimp over or read several reviews, just to get a general feel for the game and the reviewer’s tendencies. Different reviewers will see the game’s pluses and minuses differently, and it’s up to you to determine how relevant these are for you.

For example, one reviewer may see a player’s board as bland, lacking life and color, while others may praise its minimalism and great layout. Only you know what will apply to you.

While I don’t have a favorite go-to reviewer, if a review from boardgamequest.com or board-game.co.uk (Zatu games) pops up in the search results, I’ll check it out, since I found them informative, just the right length, and easy to read.

Check out the Review section on Victory Conditions

Okay, you’ve now done plenty of research, but you still can’t decide whether a game is for you or not. My final step is Youtube. Here, I follow a similar philosophy. I just search for a game review or a playthrough and if one of the guys I value highly (Shut up and sit down, No pun included, Tom Vasel, Rahdo, Rodney Smith) pops up, I will watch it.

While the reviews are usually not much different than their written compatriots, I find playthroughs especially valuable. They allow you to see the game in action. You can observe how the rules are applied, how difficult are they to remember, how the mechanisms work, what are the core principles and strategies and so on. I find myself playing the game in my head, making decisions, and critically observing the demonstrating player.

Hopefully, with these five steps, you now have a tool for recognizing a good board game. You can now easily do the research yourself. Trust me, it will produce much better results than popping into an FB group and asking “Should I get X?”

2 thoughts on “How to Recognize a Good Board Game? (5 Steps)”