Paladin’s Oath is the closest you can get to playing Mage Knight on your PC. Read the following review to find out how the system works and how the gameplay feels.

It’s no secret that Mage Knight is my favorite board game. I love its sense of progression, character building, freedom, thematic game mechanics, and how you experiment with each hand, trying to find an optimal way through the puzzles it presents.

But that greatness comes at a price. The learning process is arduous, but it’s a one-time job. The main reason why it’s not hitting the table more often is the amount of time (and space) it takes to set up and play. A digital edition, which would make getting into a game easier, while retaining its main qualities, has long been on the wishlist of Mage Knight players.

While Paladin’s Oath does not sport an official license, it is as close as you can get to a mage Knight digital edition. It’s available on Steam, and its developer (this is a work of one man) was happy to provide a key for a review copy.

Paladin’s Oath does not shy away from the fact its mechanics are inspired by Mage Knight. Well, inspired is a mild word – they are copied exactly. The way you use your hand to generate movement, block, attack, and reputation points, the way mana works, the stages of combat, and so on.

You’ll be right in the saddle after a brief tutorial that explains the mechanics rather well – to a season Mage Knight player. If you’re someone who hasn’t played the tabletop big brother, I imagine you’ll have a very very hard time comprehending what is going on. 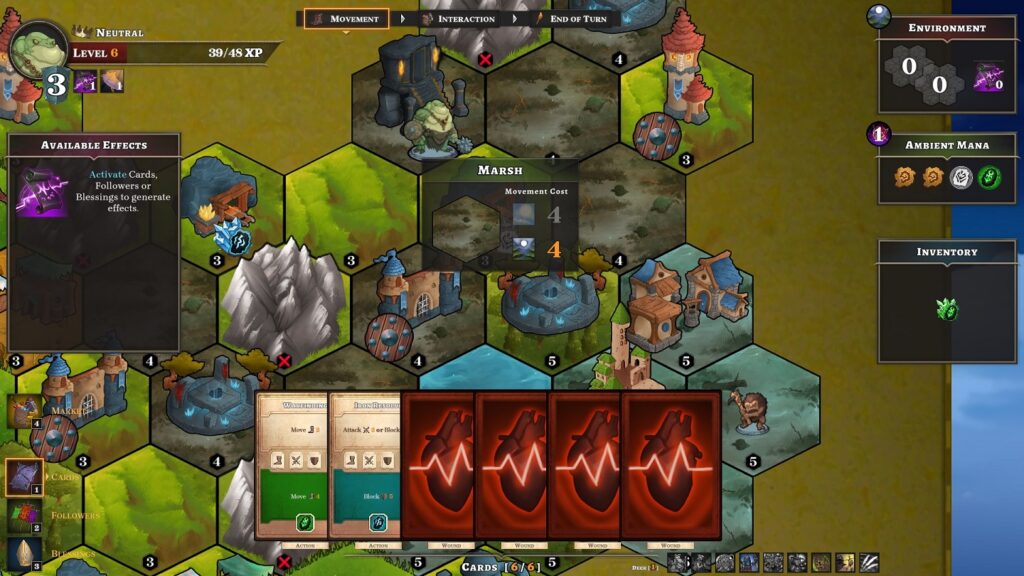 Paladins and their Oaths

But Paladin’s Oath is not a 1-to-1 exact copy. It does have unique features, namely the Oaths. Those are pre-build character customizations. Several are available and they can be used to make the game easier, harder – or just to specialize your character more.

Similar customizing options are available for game setup. Five familiar scenarios are available, and you can select how much mana you can use, the shape of the map, the strength of cities (if you play such a scenario), day/night cycle and so on.

Paladins available are also five, but they’re not exact Mage Knight copies. There are similarities (i.e. Murakh is, similarly to Norowas, good at leading armies), but mostly they feel fresh, particularly when combined with Oaths. If you’re looking for something fresh, in terms of characters, it has you covered.

It’s those Paladins and their Oaths where the rest of the theme is derived from. Yes, you’ll find your rampaging enemies, villages, monasteries, keeps, mazes, towers, mines, and other map features. But you’ll find them under different names and images. The same goes for enemies.

This is actually the aspect I had the most trouble adapting to as the images of Mage Knight enemies are baked into my brain and it took me a couple of games to get used to what is what. This is not helped by the sub-par appearance. The location and enemy icons look amateurish, and the combination of the color palette used together with unfamiliar icons makes the overall overview of the game state poor.

Things do improve the more games you play and you become familiar with enemies, but I often desired to just have the original Mage Knight graphics that we’re all so used to. I know the reason – license issues. You can’t just use someone’s IP property without permission. But frankly, as a player, I don’t care – I want that license! Perhaps in the future, the game will gain mod support … One can wish …

The strongest attribute of Paladin’s Oath is definitely its user interface. As the author says, transferring the system into a digital form has been challenging and it went through multiple iterations to get where it is now.

Mage Knight is all about experimenting with what you can do with your hand, undoing and redoing the same turn, over and over again (if not extra information is revealed, of course). Paladin’s Oath captures that spirit neatly. On the map screen, you can always go and restart the whole turn.

And in the combat screen, the process is separated into phases (pre-combat, ranged, block, attack, resolve). You can freely invest your attack points, blocks, and other effects into various phases until you’re satisfied with the end result. The computer helps with arithmetics, and you can at all times see if you have enough attack points, if you missed any immunities, how many wounds you and your followers will take, and so on.

This keeps you in check with the rules, but it also makes the combat feel different and more straightforward. In Mage Knight, you’re crunching those results in your head as you go through the various option of playing your hand, but in Paladin’s Oath, the combat happens on screen, rather than in your head.

The change in gameplay feel is significant, with the overall gameplay being shorter and less crunchy as a result. Yes, you still need to play your cards right, but the whole process feels less engaging and a lot of Mage Knight magic is lost in this process. But the overall accessibility of cards, your skills, your followers and powering cards with various mana sources is intuitive and makes the process of playing the game smooth.

In the end, Paladin’s Oath left me with mixed feelings. Yes, the UI is superb and hats down to the developer for taking on the task.

But once again it showed a large gap between what we consider fun in video games compared to board games. If optimizing your plays and doing maths is fun in the tabletop version, in Paladin’s Oath it felt dull and unengaging. This is a niche product for Mage Knight players only. Even for us, lack of license makes it difficult to get into it. I can’t even imagine going into this with cold feet.

But if you’re one of those Mage Knight players who always craved for a digital edition, here’s your chance. The game is on Steam, it’s not expensive, and definitely worthy of a try.