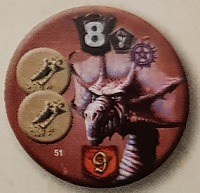 Dragons are the ultimate enemy in fantasy games. Those large, fire-breathing reptiles wait for you near the endgame, because they eat underdeveloped characters for breakfast.

Mage Knight (board game) is no different. Unless well-prepared, draconum will inflict many wounds on you and your units before they go down. This article contains a full Mage Knight draconum list, as well as some tips on how to defeat them.

Most of the dragons you will encounter will be rampaging. This means three things:

While rampaging enemies can obstruct your movement, you can also use this to your advantage. If you had the plan to attack a dragon anyway, it’s better to just move and provoke him than fight him and move the next round.

Generally speaking, draconum are a nasty type of enemy if left unblocked. They have at least one resistance (if not two), and their elemental attacks are hard to block and deal a lot of extra damage (abilities like Brutal, Paralyze, or Poison). Normally, you’d want to have at least a couple of points of a block he’s not resistant to and use other blocks (which are halved) for the rest.

Confronting them on your own is a difficult task. You’ll want a couple of powerful units with elemental attacks (like Catapults or Altem Mages) or spells, preferably with ranged attacks as this is by far the easiest way to approach dragons, especially since they are not fortified (with few exceptions).

The downside of spending such a valuable unit or a spell is directly tied to the location of the dragon. They are located on core tiles and when you are at that stage of the game you are usually preparing to assault cities, where strong units and spells are crucial. So, it’s a fine balance (and damage control calculation), deciding whether to spend units on dragons or save them for cities.

The benefits of defeating a draconum enemy are nice. Mainly, there is the substantial Fame buff, which can help you level up pretty much on its own. We’ve already mentioned Reputation bonus with rampaging and you can receive artifacts and advanced actions in ruins.

Often you will capture a city and on the next turn have the option to attack a dragon adjacent, which could be a good plan if you still have some juice in your hand (but not enough to venture forth), have plans to interact with the city and the round is coming to a close anyway.

There is an option to run into a dragon early on, and that’s in a Ruin. Be advised though, that you will not know which token you draw until you enter combat – there’s no way back now! Moreover, they do not come alone: you also draw a green or brown token beside them.

While the rewards may be compelling (two artifacts or an artifact + advanced action) it might be hard to kill them without spending too much of your hand power and time, or getting wounds. Pick your fights wisely.

Swamp Dragon is the weakest dragon (but still strong) of the base game. It has no resistances, so if you can muster together 9 ranged attack, he’s out. If not, you better block him (or sacrifice your units), because he has the Poison ability, inflicting extra Wounds to your deck. You need 10 Block (any) since he also has Swift ability.

Fire Dragon is what you would typically expect from a dragon – a fire-breathing reptile. To effectively take him out, you need Ice attack, since he’s resistant to everything else. He hits hard with his Fire attack, but luckily for you has no offensive abilities.

Ice Dragon is the diametric opposite of our Fire friend. He uses Ice to attack and defend. His attack is numerically weaker, but it comes together with Paralyze ability (you must discard all your hand cards, excluding Wounds). Ice Dragon is a fellow you don’t want to leave unblocked. Fire Blocks and Attacks are most effective toward him.

High Dragon is the most powerful beast of the base game. He is resistant to Fire and Ice attacks as well as Cold Fire attacks. High Dragon is not, however, resistant to Physical attacks, so use that knowledge to your advantage. He is hard to block as only Cold Fire blocks are effective against him. Others are halved. On top of that, he’s also Brutal, dealing 12 damage if left unblocked. Your best bet is a Physical ranged attack.

Storm Dragon introduces the Elusive ability, making the beast very hard to hit. It uses the lower armor value only if blocked. For ranged combat (making him very hard to take out from range) and unblocked combat, you have to deal 14 damage. Also, he comes with Swift, so 8 Fire block or Cold Fire block is needed to block him – you’ll be in trouble without a dedicated block.

Lava Dragon is the only draconum with a Fortified ability, making him immune to ranged attacks. You can still kill him with Siege attacks. Ice Dragon is sensitive to Fire and Cold fire attacks/blocks, so you want to have those ready. If unblocked, he’ll deal 12 damage with his Brutal ability.

Dragon Summoner is a nasty creature. Once more, your best bet is ranged combat. Although he has Physical resistance and Arcane Immunity (preventing you to use spells like canceling his attack etc.), Fire, Ice, and Cold Fire attacks do full damage.

If engaged in combat, he summons two brown enemy tokens to do attacks for him. As you know, there are all sorts of dangerous creatures with powerful attack abilities in the brown pile, so you can count you’ll be in trouble.

Savage Dragon is not overly powerful, compared to dragons from the Lost Legion. It’s one of those dragons, you can be confident to take on with an underdeveloped character. Savage Dragon is easy to block, but if you fail, he has the Brutal ability, dealing double damage in return.

Death Dragon introduces Assassination ability. If unblocked, it deals his whole damage directly to the hero. Very deadly combined with his Paralyze ability.

Luckily for you, he has no resistances or special attacks, making him an easy target to ranged attacks and blocks.

Vampiric Dragon is the only one with Vampiric ability. It means he gets his armor buffed for every unit he wounds. Combined with Elusive, this can get him up to some really high armor numbers. If you block him, you need to only do 8 damage to him and this is your best bet. All attacks count equally, as he has no resistances.

I hope you found this Mage Knight draconum list useful and that it will help you when coping with them. Or, if you are an advanced player, that it was at least interesting to read.