Seafarers were released in 1997 and are the first official expansion for Settlers Of Catan. The expansion was originally designed together with the base game, but it was later decided to separate the two in order to keep the base game more accessible.

Settlers of Catan: Seafarers expansion revolves around sea travel, exploring new islands and ship routes. It achieves this by adding new terrain tiles and ships. Special scenarios are provided and explained in the rule book.

Learn more about the base game

Clicking on the picture above (or on any other affiliate link) will take you to Amazon page. If you then decide to buy something, I will earn a small commission, as I am a member of the Amazon Associates program.

Link to BoardGameGeek page of Settlers of Catan: Sefarers

Using one wood and one wool to build (thus making wool more valuable than in base game), ships act as roads, only that they are built on the sea: between two sea tiles or between one sea and one land tile (coast). Sea routes must start and end with a settlement – you can’t build from sea route to road directly. A sea route that is not yet completed, can have it’s last ship moved once a turn, thus giving more flexibility and more options to react to other players’ moves.

The concept of sea routes also renames “The Longest Road” into “Longest Trade Route”. This works similar as before, but now roads and ships can both be counted together to form a trade route.

When a seven is thrown, player has the option to move the robber or the pirate. Buccaneer works similar than a robber, but he can only move on sea tiles (I’m stating the obvious here). It steals resources from nearby ships and prevents more ships from being built.

In certain scenarios tiles are turned upside down and are only revealed when they are reached with a road or a ship. This is combined with a rule of getting extra victory points for a settlement on a new island(s). These extra victory points depend on scenario and you get victory chits which you put underneath a settlement to score them. Chits can also be placed on islands or tiles and when they are reached, the player claims that chit and takes it down, earning a victory point.

A special terrain tile is introduced in Seafarers which yields a resource of a player’s choice. If you have village on this tile and tile’s number is thrown, you can pick any one resource card available in the bank. In case of a city, you pick any two (can be the same or different). These tiles are very valuable and are usually placed on the edges of maps. 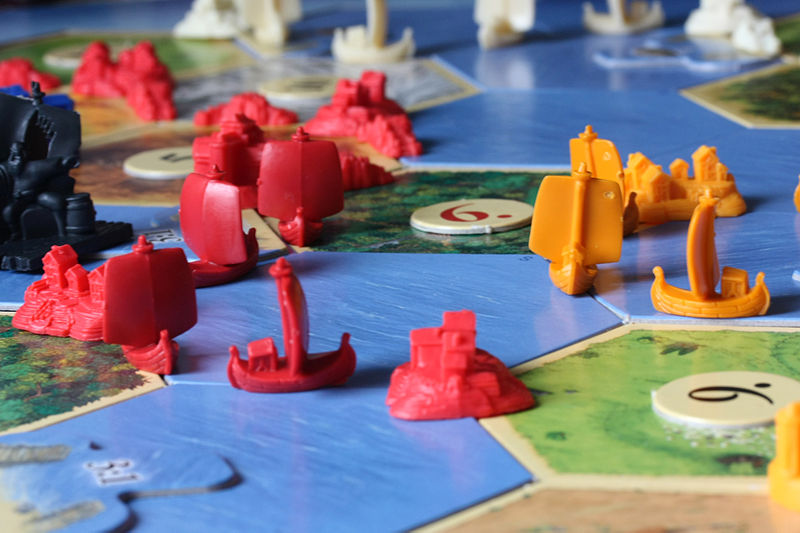 Check out my review of thc Cities and Knights expansion

Eight unique scenarios are provided in the rule book. Each has a special base tile arrangement (tile and numbers shuffles still apply of course) with corresponding rules. Usually both pirate and robber are used. Victory conditions for scenarios tend to be higher than in base game – usually 12 or 13 victory points are needed.

This is Seafarers’ basic scenario. It consists of a main island surrounded with small island. Players start on the main island, but if they expand on any of the surrounding islands, they get an extra victory points (you place a victory chit under a settlement which now grants you one more victory point as usual).

In this scenario, board is made of four islands, roughly same in size. You can start anywhere – you will have 1 or 2 “home” islands. Expanding to other islands gets you extra victory points: one for the first “foreign”, island, two for second and third.

One medium-sized island forms a starting point for players. Other half of the map starts empty and shuffled tiles are drawn from a stack and placed on the board when that spot is discovered by ship or road. They can be either sea or land tiles – if a land tile is discovered, finder receives that resource card as a reward and a random number token is assigned to that tile.

This scenario consists of one larger and several smaller island. On the edge of the larger island are, behind a wall of desert tiles, a few more tiles. Expanding to these tiles (often a gold river tile is also here) grants extra victory points.

Similar to previous scenario, but this time tribe’s villages are in the middle. They are now depicted with a number chit. Connect that chit with a ship and when that number is thrown, you get cloth (victory chit for one point).

This one introduces a special game mechanic: a pirate that moves in a predetermined circle depending on the (lower) dice throw. Board is divided by the mainland on the east and pirate island on the west with two desert islands in the middle (which the pirate sails around). On pirate island, there are fortresses, which players try to conquest to win.

For battles against pirate ships and fortresses a comparison between a human strength (amount of warships in a fleet) and pirate strength (dice throw) is used.

Players attempt to build special expensive buildings, called wonders. Moreover, these can only be built if special prerequisites are fulfilled, like having a city in specific locations, having enough victory points plus a city etc. Player with the first wonder completed wins. Wonders are built in 4 levels.

A completely blank map, players explore it similar to The Fog island scenario.

Is Seafarers expansion worth it?

Definitely. Although not cheap, it brings a lot of fresh elements to the table. New game mechanics are easy to understand and exploring new land is fun and exciting. Old strategies are still valid, but more are now available, bringing a lot variety into gameplay.

Click here to check out the price of Seafarers on Amazon.

I hope this article was informative. If you have any questions about the article or Seafarers, any (positive or negative) comments about it, please post them below.

6 thoughts on “Settlers of Catan: Seafarers”