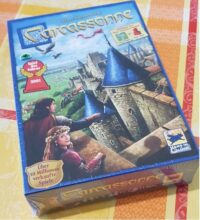 I’ve always been fascinated by maps. As a kid, I would browse the world atlas just for fun, checking out the layouts of cities and the countryside and cursing the authors for not selecting more city maps or enlarge certain parts of the map that I was more interested in.

With the arrival of high-speed internet and the rise of Google, my child wishes finally came true with Google Maps and the option to explore the world freely. Even today, I’ll travel the maps and check aerial views of cities or certain features just for fun.

It is therefore not a surprise, that map based games (let that be computer games or board games) have a special place in my heart.

Check Carcassonne base game on Amazon

If you click on any of the affiliate links and buy something, I will earn a commission, as I am a member of the Amazon Associates program. 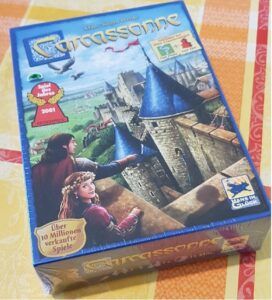 I was aware of the existence of this game for quite some while, but never really took the time and effort into finding out what is Carcassonne all about and how it’s played. It was a comment about meeples on one of my posts, that really spurred the interest in me. I’ve done some digging, learned about the rules, and played some games online to get a feel for it. (There are plenty of sites to play the game online, but more on that in a future article.)

I really liked what I saw, so the next logical step was to buy the game. The base game these days actually comes with the river expansion, and with a decent price tag , it’s a bargain.

Here’s a link to Carcassonne’s page on BoardGameGeek, the largest board game database on the world.

There aren’t really that many different playing pieces in the box: beside instructions you have the tiles, you have your figures (Meeples as they are called) and a scoring board. A lot of quantity though: over 80 tiles and over 40 meeples, so there is plenty of building material available.

Everything in the box scents of high quality and style. Meeples are made of wood and are very distinctly shaped. The tiles are of course cardboard, but the artistic style on them … I cannot praise it enough. The images on them are absolutely fantastic and not two of them are the same. Attention to detail is huge: a village here, a garden over there, just a couple of random trees by the road, the winding roads, the farms …

The tiles look really impressive on themselves, but when you start putting them together and building a landscape, it all goes a notch or two higher. Combined, the tiles form an amazingly looking picturesque medieval world. I couldn’t help myself and imagine how it would be to walk the roads, see the bustling cities or just lie in the shade of the trees in the nearby garden.

Carcassone does not have very complicated game mechanics, especially true for the base game. Fundamentally it’s a eurogame with it’s main mechanic being tile placement: players draw tile cards and place them next to existing ones, so that the pictures on them make sense and they form a landscape full of features: cities, roads, fields and monasteries.

Tile cards are drawn one by one. As players place tiles, they have the option to put their meeple figure on any of the features on that tile: when that feature is completed (a road, a city or a monastery), they receive victory points and get their meeple back. Meeples on the fields are calculated when the game is finished. Scoring system seems pretty complicated at first, but you soon get a grasp on it and realize it’s actually very straightforward and easy to understand.

In the end, the player with most victory points wins the game.

And that about covers it. With this knowledge you can go play Carcassonne.

There is of course plenty of strategy involved when placing the tiles: trying to build features for yourself and trying to obstruct other players. Managing your meeples is another important aspect: how many will you commit to fields and how many will you keep in reserve?

Luck also plays a part when you draw a new tile. Will you get the one you need? Fortunately each tile can be placed in various ways, so there are usually plenty of options available. 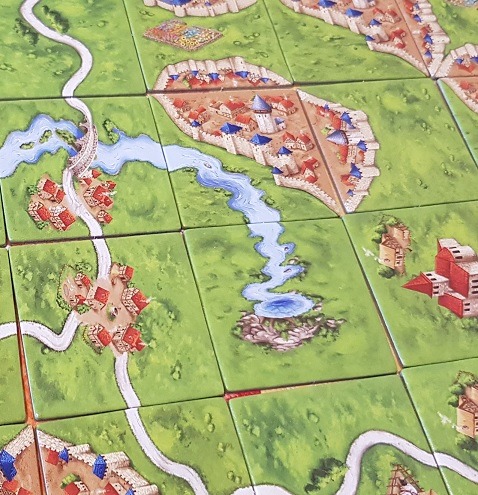 The base game is only the tip of an iceberg. Carcassonne so far received 10 major expansions, 13 smaller expansions and 7 stand-alone mini expansions. Expansions are often available together in compilation boxes. So, if you really get immersed into this game, there is no fear of running out of novelty any time soon.

Below are the all the expansions listed chronologically, just for orientation and to see how many of them there actually are. Instead of buying them one by one, I suggest you look out for Compilation boxes, which inlcude a number (of thematically related) expansions in a nicelly round packages.

Since the game is so succesful, a number of games were published as spin-offs. These share similar game mechanics or theme:

If anyone asks you have you ever played Carcassone, there is no simple yes or no, but rather a counter question: which one? Oh, have I mentioned video game versions? 🙂

(All of the above lists were created with a lot of help from Wikipedia.)

You can probably tell I’m pretty excited to start getting deeper into this game. I’ll play the basic board version and I also plan to try out different computer versions. I’ll write more as I experience more.

What are your thoughts on Carcassonne? Which expansions and spin-offs have you played and which are your favorite?

18 thoughts on “What is Carcassonne (board game)? – Introduction”