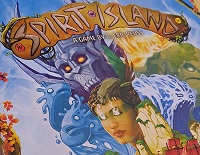 Spirit Island is a very good board game, but after the initial plays, I have some issues with it. Read more to find out why I don’t (yet) regard it as one of the greats.

After a long time of being on my wishlist, I finally bit the bullet and got Spirit Island last month. I’ve played five games so far, most of them solo with one spirit and one 2-player game. I know I’ve just barely scratched the surface here and need to play much more to be able to make a proper review, but I do have a few impressions I’d like to share with you. First, the reasons I think Spirit Island is a good game, then the reasons that keep it at “good” and prevent it from becoming “great”.

Preface: Why I think Spirit Island is a good game

Let’s get one thing straight – Spirit Island is a very good game. This article is not a criticism of that – it’s merely that I’ve had very high expectations for it and was expected to be blown away. Well, I wasn’t. But that doesn’t mean I didn’t enjoy playing or that I think it’s a flawed game system.

The main attraction of the game is definitely the spirits and how differently they play. Even with those that I played, the differences were significant, from Lighting’s Swift Strike which has powerful fast powers, to the Thunderspeaker, whose main asset is the Dahan. The spirits are well thought-out from the ground up, including the thematic and artistic aspects.

Since the invasion never stops, you have no time to pause and take a breather. The suspension and tension are knife-sharp, producing one of the better atmospheres in board gaming. You feel the pressure and every turn can be your last if you don’t optimize your card play.

The cards themselves offer a great deal of flexibility and you are free to choose how you will fight the invader. However, you’re best off if you optimize your card play according to your spirit’s advantages, the threshold bonuses you can unlock on the way, and the overall state of the board. This is never easy, since there are a lot of factors to consider, and even playing just one spirit and one island is a big brain burner.

And the time and footprint it manages to squeeze this in are phenomenal. It uses very few components, the setup is minimal, and a solo game can be done in 45-60 minutes. This alone guarantees the game will hit the table much more often than, let’s say, Mage Knight, an epitome of heavy solo board gaming.

Another thing I really like is the overall thematic setting of the game. The whole fight against the invader thing turns the table around to what you’re normally doing in games. And I like how this is emphasized by the components. Your presence and Dahan are marked with natural wooden components, while the invaders are made of artificial plastic. The art and the overall look of the game are fantastic, I should mention. 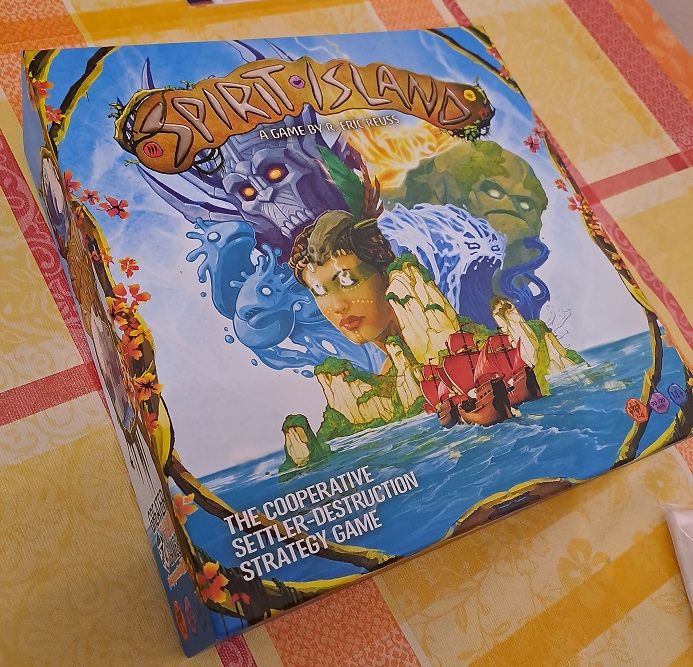 Ok, those were the thing that impressed me. Now, the reasons Spirit Island did not blow me away. It predominately has to do with how the game was designed to scale and end, both mechanically and thematically. And this results in an anticlimactic and abrupt ending. The players don’t get a sense of accomplishment. Let me explain.

As the game progresses and the fear cards are revealed, your victory conditions get easier to achieve. The invaders are allegedly more frightened and easier to scare away, which would logically lead to their invasion losing momentum.

But it doesn’t make thematic sense that they not only keep their invasion going, they even intensify it as the invader deck gets to stage three. I get why they have to, from the gameplay perspective. Your spirits grow and they must keep up, otherwise, the game would be too easy. But it kills the immersion if they are scared on one side and keep coming on the other.

This directly leads to the anti-climatic ending, my second issue. You keep fighting hard to keep the invader in control, yet they keep spreading their settlement and blight on the island at an increased pace. It’s hard to tell whether you’re winning or losing as the game will often come down to one fear card to help you out or an invader card you can’t handle. And then it’s just like, here’s the third stage fear card, the last city is destroyed and you win. Or you think you’re doing fine, then get overwhelmed in one area, the last two blights come out, and you lose. Instantly.

It seems as if the game’s progression climbs a steady cliff, only to be stopped suddenly and thrown back down, without the time to enjoy the view from the top. Even a victory seems unsatisfying, as the board is still full of invaders when you win, you only managed to destroy the last of their cities.

If I make a comparison to Mage Knight once more. In that game, you’re preparing and building up for the last fight the entire game. That last fight is epic and you feel like you accomplished something when you capture a particularly fortified city. Spirit Island lacks this final climax, instead, it just fades away.

I have decided that, despite all this, I will continue playing and give the game a few more shots to impress me. Perhaps the issues will diminish as I internalize game mechanics and victory conditions. Or maybe the expansions will fix the flawed gameplay scaling, although I have my doubts (I haven’t tried any yet.). For now, trying out new spirits is what drags me back to the table. And the fact, that Spirit Island is still a very good, challenging solo board game.

I’m curious to know whether any of you experienced the same issue and did it improve over time or with expansions. Do you have any advice for me? Let me know in the comments.